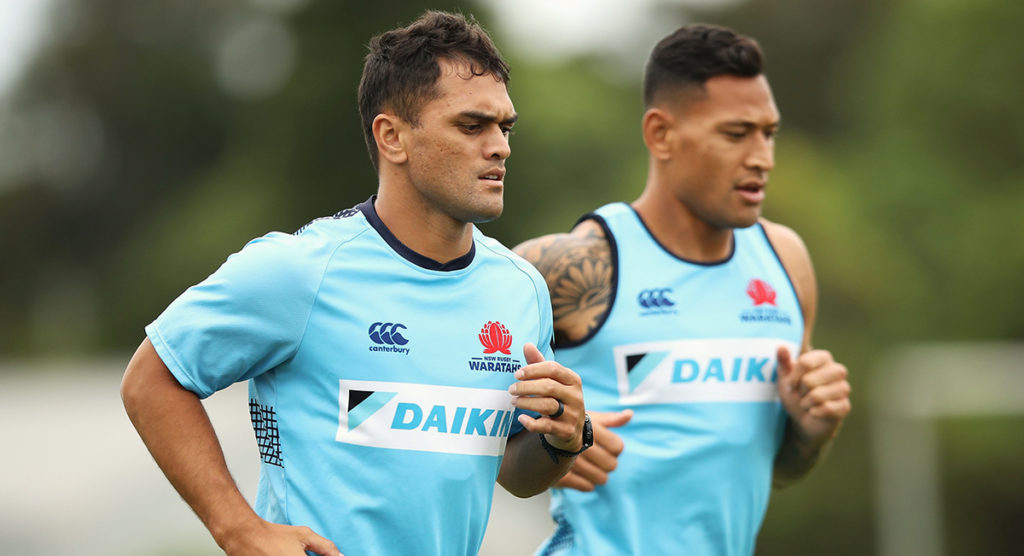 Karmichael Hunt has spoken about his communication with Israel Folau, in a “frustrating” week that will determine the Wallaby fullback’s fate. If anyone can imagine what the isolation feels like, it’s Hunt, who has had his fair share of controversy.

In vastly different circumstances to Folau’s, Hunt also found himself frozen out from his Super Rugby team last year, when at the Queensland Reds before being handed a career lifeline at the NSW Waratahs.

“You rely on your family, your friends, your teammates,” Hunt said on Thursday.

Hence Hunt has been in contact with Folau, while also checking on the Wallabies star through Folau’s younger brother John, who remains at the Waratahs.

It’s over a month since Folau was stood down by Rugby Australia over his controversial social media posts and the wait continues to learn if he’ll be sacked after being found to have committed a high-level code of conduct breach.

“As a collective here at the Waratahs, I know from speaking to the guys, we’re holding up our end of the bargain and we’re making sure that he’s doing okay away from footy in the position he’s in now,” Hunt said.

“I know his family – I was speaking to Johnny this morning – they’re doing as much as they can for Izzy as well. That’s all you can do in situations like this when there’s a process that has to be taken and a decision has to be handed down.

“All you can do is support and I have been in contact. Regardless of the situation, he’s still our friend, he’s still our teammate and he’s someone that we care about. So I’ve just been checking in on him and making sure that he’s doing okay and that his head space is doing okay and, from what I’m getting from him, he seems fine, which is a pleasing thing.”

Hunt told rugby.com.au that it’s been frustrating for everyone involved and he wishes it hadn’t happened. But says that his focus is on stopping Reds skipper Samu Kerevi on Saturday night.

Hunt admitted the most divisive issue in Australian sport was fascinating, if also a great shame.

“This is definitely a first,” he said.

“It’s a very complex issue… it’s definitely something I haven’t experienced and I don’t think the sporting landscape hasn’t experienced.

“The only thing that comes to mind is the Colin Kapernick situation over in the States, which I wasn’t intimately involved in but I was keeping an eye on it and it was a pretty polarising event.”

Folau changed his social media profile pictures on Tuesday to an image that says ‘GOD FIRST’, replacing the picture of him celebrating a try by pointing to the sky. Perhaps he is coming to terms with his fate, that he will likely learn on Friday.