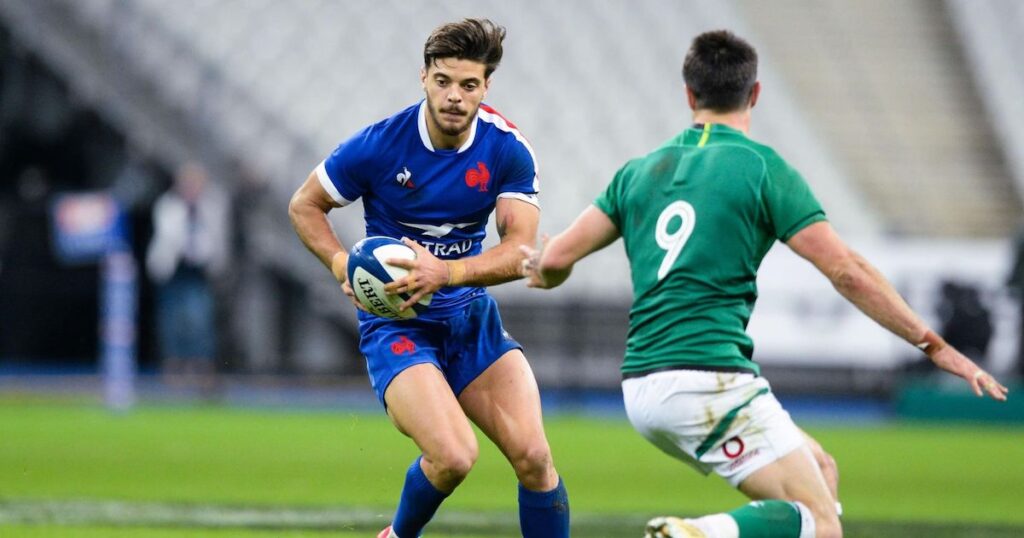 After a near-perfect performance against Ireland in the final 6 Nations match of 2020, French fly-half Romain Ntamack said that it “was good to see the fear in the eyes of the Irish defenders” as his side secured a 35-27 victory in Paris.

Speaking to French rugby newspaper Midi Olympique, the Toulouse out-half praised the attacking nature of Fabien Galthié’s youthful national squad and believes more of the same is to be expected in the coming years ahead of the 2023 Rugby World Cup.

Combining with Toulouse stablemate Antoine Dupont for the seventh match in a row in the blue of France, Ntamack was one of several playmakers for the home side, who secured the bonus point win, but missed out on the 6 Nations title on points different to Eddie Jones’ England.

Both Ntamack and Dupont scored once each, while the former’s chip and chase late in the game set up Virimi Vakatawa for the fourth try. It’s an attacking prowess which, according to Ntamack, suits this group of players to a tee.

“The unstructured game is something we work on in training sessions,” said Ntamack. “And frankly, we have a lot of players who love this style of game, they love to get their hands on the ball.

“As soon as we get the ball, we’re all behind it. Calls come from everywhere, everyone is communicating and offering solutions,” the fly-half added.

“We build on that because those are the phases where the defences are the most fragile. With the players we have, we see the space and we try to exploit them quickly.

“And, you know, as you soon as you break the gap, Dupont will be there in support (laughs).

“More generally, when Virimi or Gaël [Fickou] has the ball, you feel that the opposing defence is in panic. It’s good to see the fear in the eyes of the Irish in front of the French players. That hasn’t happened for quite a while.”

The attacking nature of Les Bleus, although a stark change from the recent Philippe Saint-André and Jacques Brunel eras, hasn’t come from nowhere. Instead, under new coach Galthié, France is making the most of its talented young players who are performing well for their clubs in the Top 14.

More importantly, they are playing an open, expansive game at club level and transferring this onto the international scene.

It is bearing fruit, as it means that the exciting back-line can act on instinct rather than simple systems, which Ntamack says was the key to the fourth try scored by Vakatawa.

“There was a scrum where we decided something,” Ntamack said.

“But I said to Antoine, if there is a [penalty] advantage, we play. The forwards sunk the Irish and there was an advantage. Vincent Rattez took [the ball] first and then I saw the Irish scrum-half move into the [defensive] line.

“I said to myself: ‘okay, you must chip over the top, there’s nothing to lose’. I did it instinctively and I got the good bounce. I then had support on both sides, with Antoine and Virimi. It wasn’t planned but you saw the reaction of the guys; they both came like bullets.”