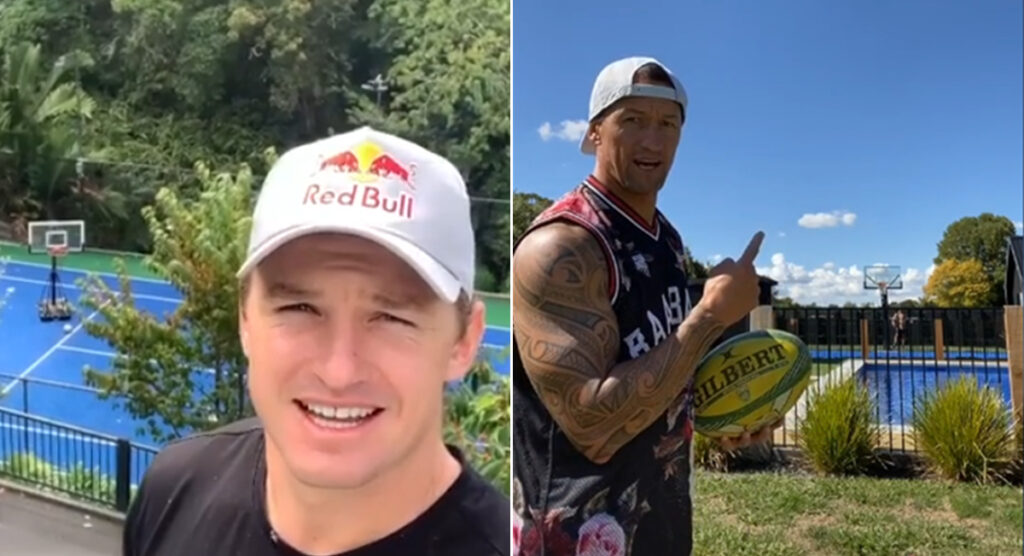 With New Zealand in lockdown due to the Covid-19 pandemic, many rugby players are turning to social media to share their creative antics with the world. And two of the greatest ever have joined in, as All Black legends Beauden Barrett and Carlos Spencer show here.

The debate surrounding New Zealand’s greatest ten is one that will go on as long as the game of rugby is played.

Grant Fox, Dan Carter, Andrew Mehrtens and Carlos Spencer are usually on the list. More recently, it’s Beauden Barrett that many say is the best rugby player on the planet, therefore bringing him into the mix.

Whichever side of the argument you’re on, we’ve been treated to a bit of a skills show by he and Spencer, as both have uploaded videos showing them doing trick shot challenges.

Barrett had a go with his kick-to-basketball-hoop, as can be seen below via his instagram.

However, Spencer and his son Payton have upped the ante, doing trickshots every day while in isolation. Payton has been uploading them to his TikTok account, and some of the skills on show are genuinely brilliant.

Day 1 was simply some training, so we haven’t bothered to include that here, but above is day two and then below you can continue to see the rest.

On day three, it was a punt straight into the hoop, similar to what Barrett did. But, no surprise, King Carlos nailed it on just his second attempt.

On day four they went a bit more traditional, with a kick ‘at goal’ from a tee on the floor.

As you can see, talent is in his blood, as Payton mixes it up with his old man without too much trouble.

Day five is perhaps the most fun to see, as fans of Carlos will remember all too well that he was a big fan of the reverse, no look kick.

Both father and son impress here.

They will continue to keep these coming, no doubt, so make sure you follow them on tiktok and if not, we’ll share the best of them here as they come out.

Let us know in the comments what you think of these! And feel free to submit your own via our Instagram or Facebook.