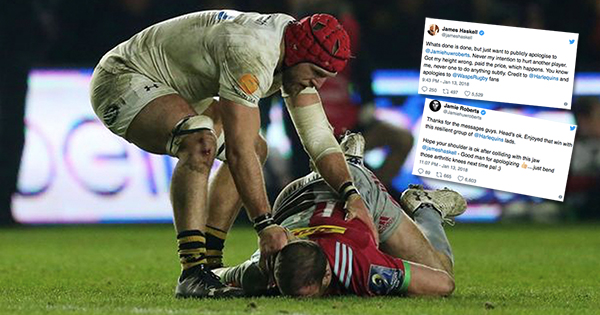 Wasps flanker James Haskell has publicly apologised for the brutal tackle on Jamie Roberts that earned him a straight red card late in their Champions Cup clash with Harlequins. With Haskell off the field, ‘Quins snatched a dramatic 33-28 victory.

Haskell flew into Roberts in midfield, mis-timing the challenge slightly but certainly going in too high, resulting in his shoulder making contact with Roberts’ face. After viewing replays, Referee Romain Poite was left with no option but to give the England flanker his marching orders.

He will face a disciplinary hearing this week, and is at risk of missing the start of the Six Nations.

Roberts went off for a Head Injury Assessment (HIA), with both players shaking hands as they left.

Haskell also made a frank apology on social media, directed at both Roberts and the Wasps fans.

Whats done is done, but just want to publicly apologise to @Jamiehuwroberts. Never my intention to hurt another player. Got my height wrong, paid the price, which happens. You know me, never one to do anything subtly. Credit to @Harlequins and apologies to @WaspsRugby fans

Roberts responded, reassuring fans that he is okay and giving Haskell some handy advice.

Thanks for the messages guys. Head’s ok. Enjoyed that win with this resilient group of @Harlequins lads.

Hope your shoulder is ok after colliding with this jaw @jameshaskell – Good man for apologizing ????????….just bend those arthritic knees next time pal 😉

Wasps’ Dai Young is realistic about the upcoming ban, which will rule Haskell out for a few weeks.

“There was certainly no intent, he just tried to get off the line to shut the pass down. There wasn’t much wrong with the timing. It’s where the shoulder makes contact and that will determine whether he gets banned or for how long.

“His track record should go in his favour, but only time will tell. James is really disappointed. He stood up and apologised to the player straight away.”

To further compound matters, Halequins’ James Chisholm then crossed for the winning try.

“I think it’s over for us now. I said we had to win both of these last two games and probably needed nine points. Two points here isn’t enough,” said Young.

View the incident below, and match highlights under that