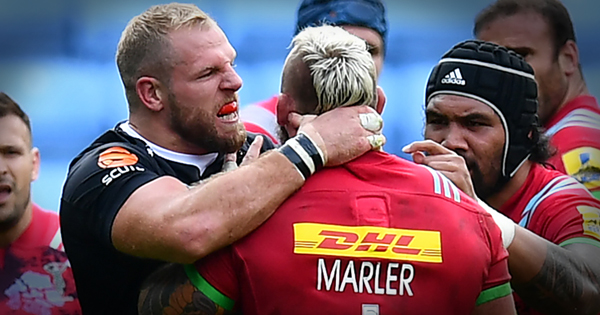 Harlequins got the better of Wasps with a tight 24-21 win at the Ricoh Arena on Sunday, and in the first half it was Joe Marler getting the better of England teammate James Haskell, as he goaded him into a receiving a yellow card.

Marler and Haskell, teammates for the British and Irish Lions recently too, got involved in a scuffle on the floor that led to Marler spraying water in Haskell’s face, which didn’t help him cool down.

He explained to the referee that Marler had choked him with his scrumcap, then sprayed water in his face, but the pleas were ignored and Haskell was sin-binned for the reaction – which saw him throttling Marler briefly – while the Harlequins prop went unpunished and stayed on the park.

“He sprayed water in my face and choked me with his cap!” Haskell said.

Wasps boss Dai Young wasn’t pleased with how it was handled, calling for consistency.

“What you want from referees is consistency, and I’ve got to be honest I thought he was consistent – he gave us nothing all game and that’s all you can ask for really!

“I think if someone rips your hat off then squirts water in your face, what do you expect? I just thought it was very harsh on James Haskell.

“We’ve all watched James (Haskell) play over the years, he doesn’t react to much,” Young continued.

“But you could see he was pretty annoyed, and more annoyed for getting a yellow card for reacting. And by the way he didn’t throw a punch, he just grabbed the guy. He’s probably got better restraint than I would have had.”

Post match, the Test teammates – both renowned for being jokers off the field – embraced and all seemed to have been forgiven.