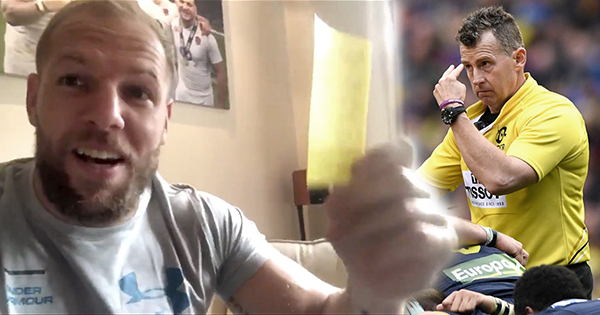 Northampton Saints and England flanker James Haskell has received his fair share of cards over the years, but this one – coming from arguably the best referee in the world – was more appreciated than most.

It came after the backrower was in Swansea for a preseason friendly, and put out the call on social media for someone to help him find a good place to go in his downtime.

“I reached out on social media to see if there was any good places to go for coffee,” explained Haskell. “One man who got back to me was refereeing legend Nigel Owens.

“Unfortunately, we couldn’t meet up but i told him about my passion for welsh cakes… Not only has he made me Welsh cakes, but he’s sent me a yellow card – which he’s given me on the field many times before.”

There was a message on the card though, as read by Haskell in a twitter video:

“Enjoy the Welsh cakes. You’ve had a few of these yellow cards off me so you may as well keep it!”

Fantastic banter between the two, another example of the respect that exists in rugby.

The best welsh cakes I have ever had. Thank you @Nigelrefowens
Its the first time I have been happy getting a yellow card ???????????? pic.twitter.com/CgUI9kjned