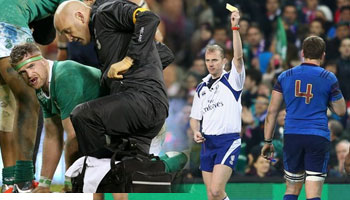 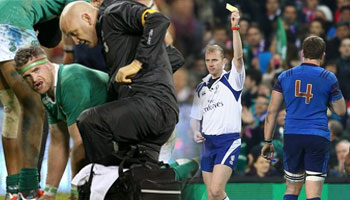 Jamie Heaslip has accepted the apology offered to him by Pascal Pape on Twitter last night. The French lock faces a disciplinary hearing today to judge whether he will be banned or not for the knee to the back that has possibly ended the tournament for both.

France second row Pape was shown a yellow card by referee Wayne Barnes for kneeing Heaslip in the back during the weekend’s Six Nations clash in Dublin, a contest that Ireland won 18-11. He will appear before an independant disciplinary committee in London today.

Heaslip was replaced shortly after the incident, and will miss the England match due to the injury, damage to three vertebrae. He may be available to play again in four weeks.

“Although this injury causes a good deal of discomfort, it does not impact on the structural integrity of the spine, and once healed should pose no long term issues,” said an Ireland medical report.

“Typically this injury is treated akin to a soft tissue injury, according to symptoms. Jamie is already feeling more comfortable and it is hoped that he will be available to play again in approximately four weeks,” it said, also confirming the injury: “fractures of the transverse process of three vertebrae”.

Last night, Tuesday, Pape took to twitter to apologise to Heaslip. He wrote in French, saying “Sincerely sorry to have injured @jamieheaslip in this action of the match, not at all my intention to do him any harm #objectivityforsome”, to which Heaslip graciously replied “Thanks for your message. Rugby is a physical game and one accepts that can happen. I accept your apology completely”. 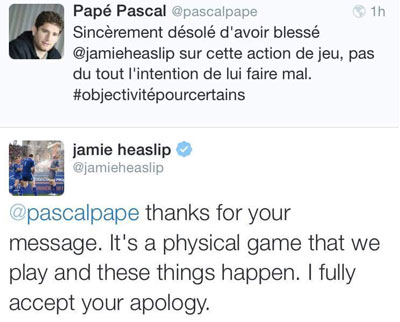 French coach Philippe Saint-Andre has defended his man, saying that he didn’t think it looked as though it was a deliberate knee to the back.

“When you watch the images of the incident I don’t think you can say it was deliberate,” said Saint-Andre. “However, I said to Pascal you received a yellow card just at the moment we were gaining the upper hand both physically and territorially as we were in their 22.

“Although we didn’t concede many points it was still a pivotal moment. You expect something like that from an inexperienced player, not one with over 50 Tests under his belt. It was the worst possible moment for that to happen.”

UPDATED VERDICT:
Pape has been banned for 10 weeks following two days of hearings in London.

The panel ruled that the offence was ‘at the top end of World Rugby’s scale of seriousness’, and banned him for 15 weeks before reducing it by 5 due to his ‘admission of foul play and his experession of remorse for what had occurred’.