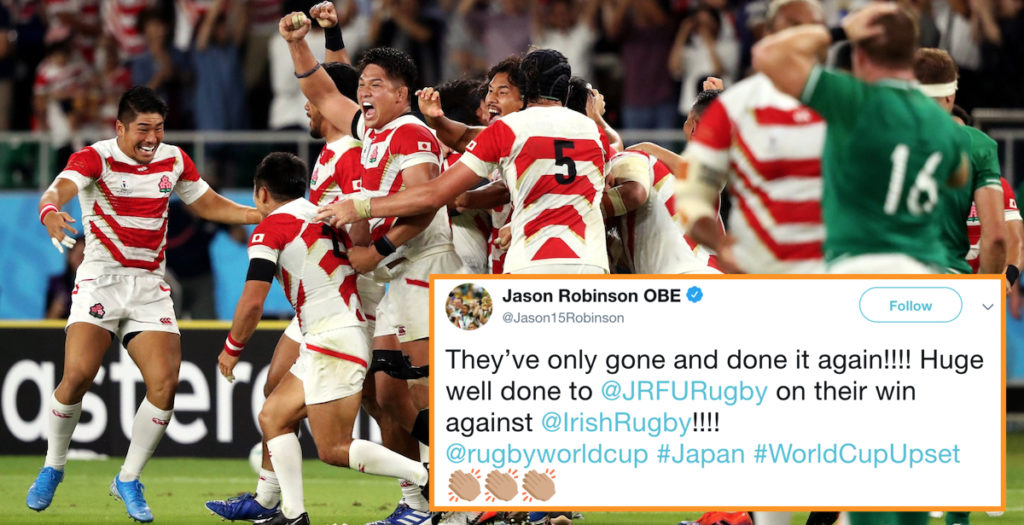 Japan stunned Ireland 19-12 in Shizuoka on Saturday to go top of Pool A after two rounds of the Rugby World Cup.

Late replacement Kenki Fukuoka scored a try in the second half to give Japan enough to secure a historic win in their home country.

On home turf, Japan have achieved an incredible win over Ireland! Shizuoka is rocking!

The Japanese upset South Africa in 2015 and have repeated this effort with yet another victory over a tier one nation, and here’s how the rugby world has reacted:

They’ve only gone and done it again!!!! Huge well done to @JRFURugby on their win against @IrishRugby!!!!@rugbyworldcup #Japan #WorldCupUpset 👏🏽👏🏽👏🏽

JUST LET THIS SINK IN. Japan just beat world number 1 Ireland in a stadium that looks like it’s about to get bounced into another prefecture. @bbc5live

From Ireland’s point of view, a catastrophic collapse after going 12-3 up within 22 minutes.

No composure or sense of calm as Japan ran rampant. Mistakes throughout, discipline poor, no control, lack of energy. So poor after last weekend’s positive start. #JPNvIRE

Wow wow wow! Awesome result for @JRFURugby and yet again the story of a @rugbyworldcup! Could mean night nights for Scotland, what a group that is now! South Africa will be delighted!

Classic @jimhamilton4! Who ever wins he’s got their DNA in them! He’s disowned being Scottish, he was Irish last week now he’s English, Japanese and probably a New Zealender too! Absolute 🤡 https://t.co/Z8LyHG0Vow

.@JRFURugby head coach Jamie Joseph speaks after his side made history by beating Ireland for the first time. #RWC2019 #JPNvIRE pic.twitter.com/vuqd1Dv3Bp

Every rugby fan (except the Irish) in the world right now going to buy a Japan shirt#IREvJAP #RWC2019 🇯🇵🇯🇵 pic.twitter.com/UnIpP3B0NI