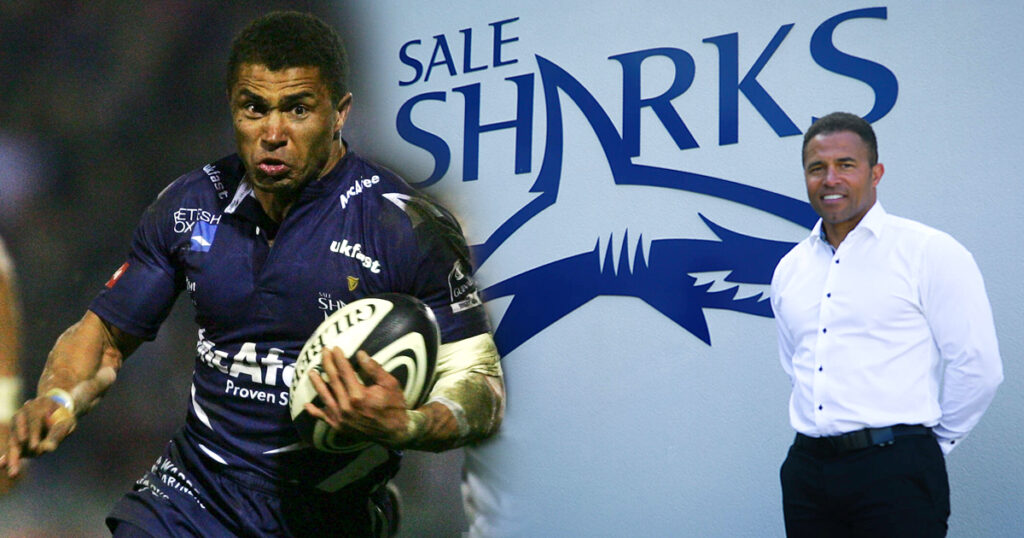 Sale Sharks have today announced the appointment of club and England legend Jason Robinson OBE as a non-executive director. Robinson who was a key part of Sharks’ Premiership winning side in 2006 and won more than 50 international caps, returns to the club 14 years after he played his last game.

The 46-year-old will be based at Sale’s Carrington training ground and will work on projects across the commercial, community and rugby departments of the club.

Sharks’ CEO Sid Sutton has hailed Jason’s return as the ‘perfect storm’ as the club build a new culture based on care and togetherness both internally and in the community.

And for Jason, it’s a chance to help kick-start a new era at the AJ Bell Stadium.

“I want to work with people who are passionate about bringing about change and as soon as I started speaking to Sid (Sutton, Sharks CEO) it was clear that we were perfectly aligned and we had the same desire to develop people and care for the community,” Robinson said.

“I know what this game has done for me and I know the impact rugby can have on lives. I’ve gained a lot of experience in the 14 years since I finished playing and now I’m really excited to be back at a club where I can use that to make a difference.

“This club that gave me so many of my best memories on a rugby field. Now I want to use all the knowledge and experience that I have to help the club in some of the areas that I have worked in – community, corporate, and rugby too.

“The potential to grow the club is huge and we have big plans to increase the fan base and make this club an organisation that the north of England can truly be proud of.

“I haven’t been this excited about a new project for a long, long time.”

Jason won more than 50 international caps and scored a try in England’s 2003 World Cup final triumph against Australia. And now he wants to pass on the experience he picked up during a glittering 20-year, cross-code career.

He added: “With Alex Sanderson and his team in place we’re perfectly placed to keep building and improving on the pitch. We’ve got some of the world’s best players at this club and there’s no limit to what we can achieve.

“Alex and I played together twenty years ago at Sale. He was really enthusiastic about the impact I could have on the current squad. I know from being around the players that they want to learn. Some of them have been asking about footwork drills already.

“It’s an honour for me to be able to come back and add to the mix of skills already at the club. Alex’s approach to the game, in particular the mental side of playing rugby and the relationship he has with the players, mirrors the way I see things.”

Sharks’ CEO Sid Sutton said the decision to bring Jason back to the club had been an easy one.

He said: “Jason is such a huge part of this club’s rich history. We want to learn from his experience and from the achievements of the club in the past – but we also want to move forward and build a club that our supporters, and everyone in the North, can be proud of.

“This is a new era for Sale Sharks. We have a clear vision to build a culture that develops and cares for people and the local community is right at the heart of this.

“After meeting several times with Jason, it’s clear to see that his values and ambitions are aligned perfectly to ours. He cares deeply about giving to the community, sharing his experiences with all and using rugby as a tool to promote this.

“His story speaks for itself and we’re really excited to bring him back to work right across the organisation. It’s the perfect storm.”

We’ve got some BIG news coming your way involving @Jason15Robinson 👀

Keep your eyes on our socials this week! 👊🏻