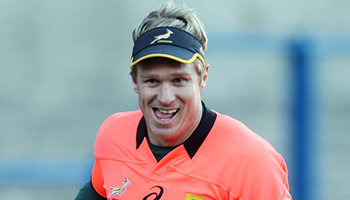 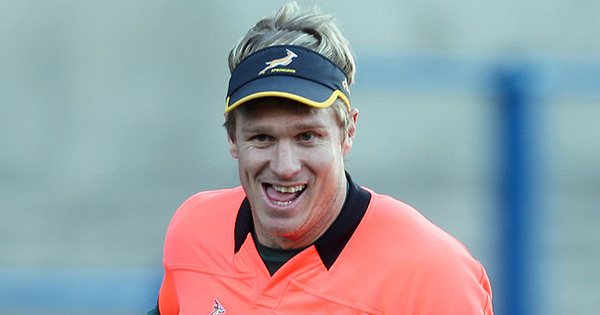 Jean de Villiers will make an inspirational come-back to top-level rugby from the bench for the Springboks, almost eight months after suffering a horrific knee injury, when they take on the World XV at DHL Newlands in Cape Town on Saturday.

Victor Matfield will captain the Boks, with Warren Whiteley making his first start in the Green and Gold, while two uncapped players, Jesse Kriel and Vincent Koch, have been included in the match-23.

If De Villiers makes an appearance it will be his first rugby since suffering a dislocated knee and ligament damage in the final match of 2014, against Wales in Cardiff.

De Villiers has gone through more than seven months of rigorous rehabilitation and is now completing a remarkable recovery.

“Jean is a massive asset to South African rugby and it’s wonderful to know his return to play is progressing so well that we can give him some game time from the bench on Saturday,” said Springbok coach Heyneke Meyer.

“The mere fact that he is back in shape and ready to play is testament to his incredible work-ethic and his professional approach to the game. Jean has really put in hours and hours of extra work to get here and he is a great example for any player on how to put yourself in the best possible position to recover.

“We will still manage how he is used against the World XV and afterwards we’d like him to return to Western Province, where he will be available for their Absa Currie Cup warm-ups.”

Meyer said the decision to hand the captaincy to Matfield for the time being was not a difficult one. Ruan Pienaar has been given the vice-captaincy.

“The captaincy is a very important thing to me and it’s something that I believe should not be treated lightly, especially at international level,” said Meyer. “Victor is the most-experienced player in the history of Springbok rugby and has captained successfully at every level of the game.

“He led last year too when Jean was injured and was the vice-captain for the rest of the season. Victor is also still in great shape – at our recent fitness tests, he performed the best of all the forwards.

“Ruan is very experienced and in a key decision-making position. He will run things at the back with Bryan Habana and JP Pietersen backing him up.”

Meyer said of the selection of Whiteley, Kriel and Koch: “All three of them were magnificent in Vodacom Super Rugby and they deserve this opportunity. I’m excited to see how they step up to this level.

“I’ve always rated Vincent and followed his career for a long time. He has really improved a lot recently, which is testament to the hard work he and everyone who has worked with him, has put in. He has proved that players can become Springboks from one of the so-called smaller unions.

“Warren is a specialist No 8 and will have big shoes to fill with Duane Vermeulen out injured. Although he has played in only two Tests, he brings experience and leadership to the pack, having led the Emirates Lions with great style this season.

“The reason we’ve decided to go with Francois Louw and Marcell Coetzee is because we have lost some ball-stealing ability with Duane not available, but both our flanks can now fulfil that role.

“Jesse has played at outside centre before and starred for the Junior Springboks in that position in four of their five matches in 2014. He’s also been training with us for a long time and I’m sure he will slot in easily with Damian de Allende in an exciting but a little inexperienced midfield combination.

“I’m very excited to see how Jesse, Damian and Handré Pollard will play next to each other. They are still young and I believe they are the future. They will also have a very experienced back-trio next to them on Saturday. It’s important to have a combination of youth and experience and we’ll continue to work on that.”

The Bok coach added that he also had to keep in mind the return to the game of players who had been injured in the last few months.

“We had to bring players such as Oupa Mohoje, Schalk Burger, Cobus Reinach, Pat Lambie and Jean back at some stage and decided this was the best opportunity to do so,” said Meyer.

“The same applies for other players returning from injuries, who we will manage in the coming weeks. We don’t have a lot of time to get ready for the World Cup, so we will have to use every minute of game time we have wisely before we get on the plane to England.”

Meyer also announced that following a meeting with Jaque Fourie on Tuesday, a mutual decision was taken that he would return to Kobe, his club in Japan, to regain his fitness and to get game time.

“He decided to withdraw from the Springbok squad for now, but we agreed that the door is still open for him to be selected for the Rugby World Cup if he is needed,” said Meyer.

– The referee is John Lacey of Ireland, who has been in charge of two Springbok Tests before, both in 2014 – against Argentina at Loftus Versfeld (SA won 13-6) and against Wales in Cardiff (SA lost 12-6).