Jebb Sinclair controversially red carded for 'leading with the elbow' 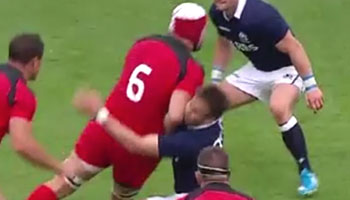 Canada came agonisingly close to a famous victory over Scotland on Saturday, but had a late penalty reversed due to a controversial sending off. Scotland will be relieved to have won the tour game 19-17 after the home side pushed them all the way.

Both sides scored a try apiece in Toronto, but the Six Nations side failed to take control of the clash as the Canadians stayed in the game right to the death. They could easily have snuck a win too if it weren’t for the referee and TMO intervention.

London Irish loose forward Jebb Sinclair made a strong run through the midfield, taking out Ruaridh Jackson in the process, and while play continued and Canada were eventually awarded a kickable penalty, New Zealand referee Mike Fraser called on the TMO to have a look at the incident.

The 18 788 local fans watched on in horror as Fraser judged that Sinclair had led with the elbow, and deserved to be red carded for it. Canada were denied the shot at goal, and had to play the last few minutes with just 14 men.

“For me, it wasn’t even a penalty against Sinclair and decisions like these set a dangerous precedent,” said former Scotland international Mike Blair in his BBC column. He said that if referees are going to penalise and punish that type of thing, then they need to at least be consistent.

Canada captain Tyler Ardron, who could be heard saying to the referee something like ‘It’s happened the entire game. How many elbows have we had in the face? What do you have against us?’ said post match that they shouldn’t have left it that late in the game to go for the win.

“I’m sure that call is what’s going to be talked about this week. I don’t think it should have come down to that, we should have closed it out before that, it shouldn’t have made a difference.”

What do you think of the red card for ‘a deliberate elbow to the head’?