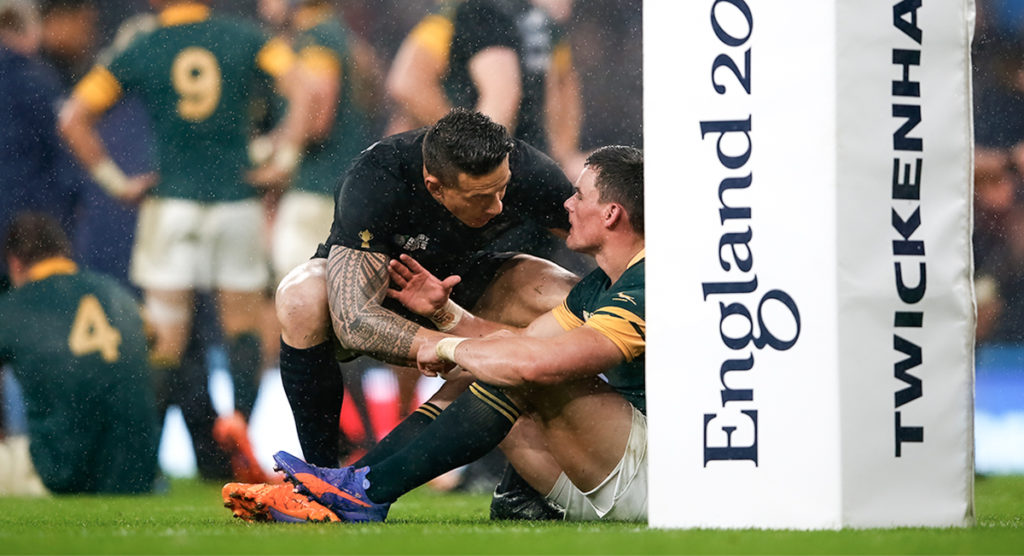 Jesse Kriel has spoken about the character of Sonny Bill Williams following the semi-final loss for the Springboks at the 2015 Rugby World Cup. The two sides meet again this weekend and then in their opening RWC 2019 games, so here’s a look back at that moment of sportsmanship.

After shock defeat to Japan in the pool stages, South Africa picked themselves up to eventually end the tournament in third place overall. On the way to that position, they faced New Zealand in the semi-finals, in what was a tense, hard-fought battle between the two old foes that ended 20-18.

After the final whistle, a dejected Kriel was spotted on the turf, laying against the post cushioning as he took in what had just happened.

Instead of celebrating with his teammates, star centre Williams came over to console Kriel, a moment that was captured on camera and has now become an iconic set of images.

“It was over… our whole dream and everything that I believed we were going to win was not like I thought it was going to be,” Kriel explained in the Supersport feature called The Road Less Travelled.

“The natural thing would be to go celebrate with your teammates, and here he was helping me up. It just shows the character and the kind of player that he is.”

You can watch the full mini-doc below, as it takes an in-depth look at Jesse Kriel’s path to success.

The All Blacks host the Springboks in Wellington this weekend, with both Kriel and Williams part of the match day squads.