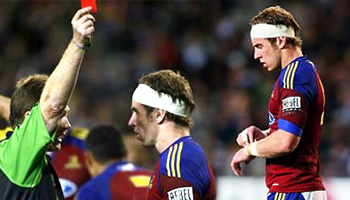 All Black Jimmy Cowan was red carded on the weekend as his side, the Highlanders, went down 26-6 to the Blues in their Super 14 meeting at Eden Park.

Cowan, known to be a bit more hot-headed than most, smashed Blues flyhalf Jimmy Gopperth after he cleared the ball from his own in-goal area.

Cowan had been in referee Stu Dickinsons face all night, so when this late and dangerous looking hit came in, Dickinson had no hesitation in sending off the Highlanders scrum half.

A red card offence warrants a disciplinary hearing, and Cowan has since been cleared of further punishment, with Sanzar judicial officer Bruce Squire ruling that he should have been given a yellow card at most.

Squire said that despite the referees view of it, the tackle was not late, as the footage revealed that it was made less than a second after Gopperth had kicked the ball.

In addition the point of contact was at chest level, so the only issue Squire found was Cowans failure to use his arms when making the tackle.

Gopperth said hed already moved on from the incident, with no ill feelings towards his namesake.

“I hit my head on the ground pretty hard and was a bit dazed,” he said. “But that’s rugby. It’s a physical game.”

What’s your take on it? Should it have just been just a yellow, or was it more malicious as Cowan could clearly see that Gopperth would kick, yet followed through anyway?