Joe Marler and Marcos Ayerza both banned for two weeks 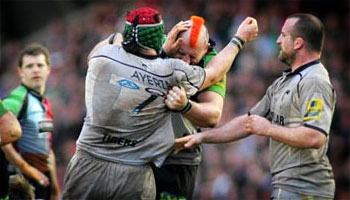 Front rowers Joe Marler and Marcos Ayerza have both been banned for two weeks following an altercation that took place during the Harlequins and Leicester Tigers Aviva Premiership game on Saturday.

Both players were red carded by referee Wayne Barnes, who saw the incident unfold right in front of him, with Ayerza head butting Marler, who then retaliated with a few seemingly well placed punches.

The pair were sent from the field, and earlier today faced an RFU disciplinary hearing. The result of that is that they were both handed two week suspensions, making them free to play again on April 19.

It was a fiery clash with a few yellow cards and a serious lack of numbers on the park at one stage. Referee Barnes had sent Will Skinner and Mark Lambert from the field too, albeit temporarily, but that meant Quins were down to 12 at one stage.

Harlequins Director of rugby Conor O’Shea was furious with the officiating afterwards.

“There are a number of talking points. Does Joe feel hard-done by? I know I would be. Should he have reacted that way, probably not. Was the provocation high? Absolutely. But I do want to know why when Tom Williams was tackled off the ball going for the line, there was no penalty try, no yellow card when both should have been 100%,” he said.

Leicester’s Richard Cockerill saw things slightly differently, saying “That’s rugby. So much happened out there and it was a fractious game at times. Marler was involved in everything. He has a Mohican hairdo dyed orange so he’s difficult to miss.

“It’s up to Quins to deal with him. We look to our own players.”

Springboks blast back after 'unfit, unskilled' criticism from NZ

The Springboks have been asked about the brutal nature of the Rugby Championship criticism they suffered from New Zealand critics this week.