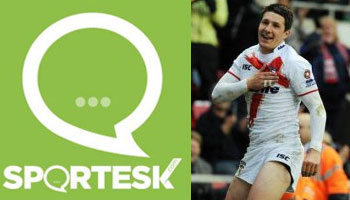 Many people involved in sport find it hard to identify friends, teams and career opportunities against the background of hectic modern lifestyles.

Young people in particular have mobile lives, moving between jobs and education and as a result many drop out of sport. With sport so firmly in focus following the 2012 London Olympics, Sportesk will help people to continue playing and staying involved in sport.

The Sportesk concept has the enthusiastic support of Gareth Widdop of Melbourne Storm and England rugby league, a rugby teammate of the Sportesk founder and now an ambassador.

When he was released from Halifax Blue Sox as a scholarship player he had difficulty finding a new club and so turned to rugby union.

Widdop stated, “If it wasn’t for me going to Australia and getting picked up by the systems they have in place, I wouldn’t be playing for Storm or England now. Sportesk is a great concept, especially for kids in the position I was in.”

“It can be used as an aid for professional clubs and governing bodies to track the development of players who just missed out on selection for representative honours, but have the potential to play at a top level,” he explained.

Sportesk is endorsed by SRL (Student Rugby League) to track players in the top 24 rugby league playing universities for the 2012-13 season. This means that the most talented players and coaches will be signed up to Sportesk. Talented young players who register with Sportesk will have the chance to be scouted by some of the universities.