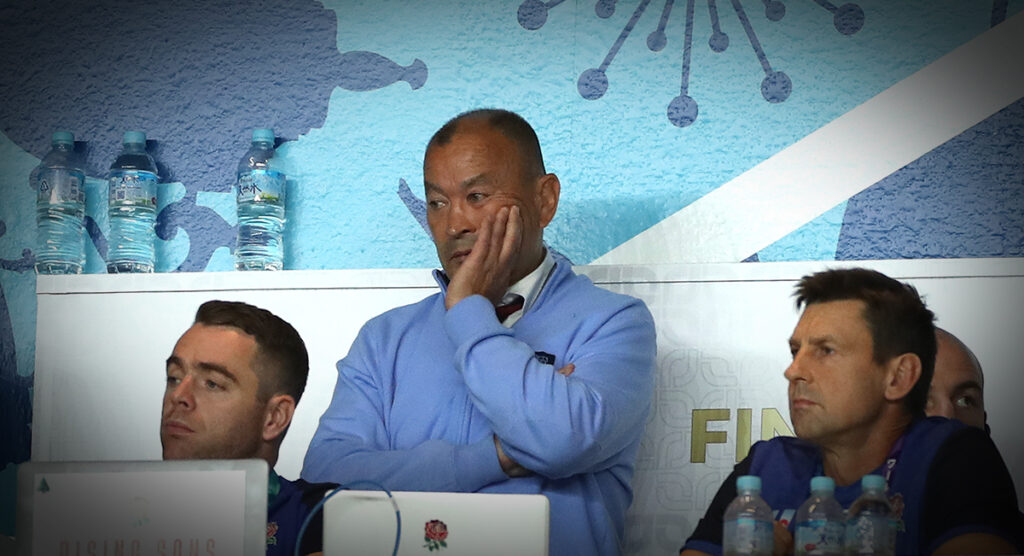 Eddie Jones has recently revealed that he regrets not changing his England starting XV for the Rugby World Cup final against the Springboks.

England were humbled by Siya Kolisi and his side in Yokohama, and Jones, speaking to The Telegraph and Sky Sports, has rued keeping the same players that started against the All Blacks the week before. Ben Spencer was the only change in the squad, who came in on the bench for the injured Willi Heinz.

Since the 32-12 loss, pundits and fans have picked over the bones of the defeat, speculating what changes could have been made in personnel. While Jones did not specifically point out any alterations he would have made, there is a good chance that he would have been lambasted either way in the event of a loss.

“I know in my head where we could have probably made improvements,” said Jones.

“One area was that I probably made a mistake in terms of selection. That’s all with the benefit of hindsight, but I should probably have refreshed the team for the final. Apart from that, it was one of those days.”

hard to leave anyone out after that SF performance. who could it have been Kruis for Lawes? Slade for Ford? it was one game too many for us.

The most glaring change to the starting XV that has been mentioned by many was turning to Owen Farrell at flyhalf, with Manu Tuilagi and Henry Slade in the centres. This was the setup that Jones opted for against Australia in the quarter-final, to provide more rigidity in the midfield against the potent Samu Kerevi.

George Ford came in for the semi-final against the All Blacks, moving Henry Slade to the bench and shifting Farrell into the twelve shirt. In order to beat the All Blacks, any team must take the game to them and the Leicester Tigers flyhalf possesses the world class attacking instinct and playmaking ability to do that.

The 19-7 victory over the All Blacks has been lauded as England’s greatest ever performance, and deemed one of the best team performances in rugby’s history, but in itself it brought new problems.

If he had made changes and still lost, he’d have been heavily criticised for not going with the team that beat the All Blacks. Hindsight is a wonderful thing.

The Springboks posed a vastly different challenge to Steve Hansen’s side, as they play a far more direct style of rugby, built upon the strength of their forwards and the powerful running of inside centre Damian de Allende.

This opposition perhaps suited the backline that started against Australia, as it was about physically overcoming them and grinding out a win. With Farrell at ten, England may have been slightly more resolute in defence, not that Ford did anything wrong, and would have brought Tuilagi into the game more to counter the Springboks’ rush defence. Jones finished the game with this setup, but by then it was too late.

Damned if you do, damned if you don’t. Captain Hindsight would be the greatest signing a country could have. England were just beaten by a better side on the day so move on and learn from the experience.

Every cliché regarding hindsight has been said by fans since the final, and it is only now that we know where England perhaps went wrong. While Jones may admonish himself, he would have also been chastised by some for not sticking with the same team that beat the reigning champions in such emphatic fashion.

It is only retrospectively clear that the emotional and physical effort put into overcoming the All Blacks left England a Herculean task to replicate the same intensity a week later. However, Jones was not to know that, and while the likes of then-Wales head coach Warren Gatland raised the issue, few would have expected England to be so flat in the early stages against Rassie Erasmus’ side.

On the day we were beaten by a better team. I find it strange that people start saying this one should have started over that one. Unless you were party to watching the players in training it’s just benefit of hindsight.
EJ appears to be looking forward at least, good on him

Discussions still rage as to whether George Kruis could have started to ensure security at the lineout or whether Courtney Lawes or Maro Itoje could have played at blindside flanker to add more ballast in the pack.

Alongside the debate as to who the starting props should have been, these are all changes that may have paid off, but would have equally been fuel for more criticism had the result been the same. After all, this was the same pack that devastated their counterparts from New Zealand the week before. Ultimately, this was an inspired Springboks team, and Jones acknowledged that.

Eddie Jones is talking about how he should have changed the England side for the final. I think most people knew that before the final…

The irony of this all is that had England snuck to a victory over the All Blacks without looking all that impressive, Jones’ job would have been made easier, as he would have been given the freedom to change his side without censure.

While it may be simple for some to point fingers now, and the Australian himself to regret some of his decisions, it is hard to blame him.