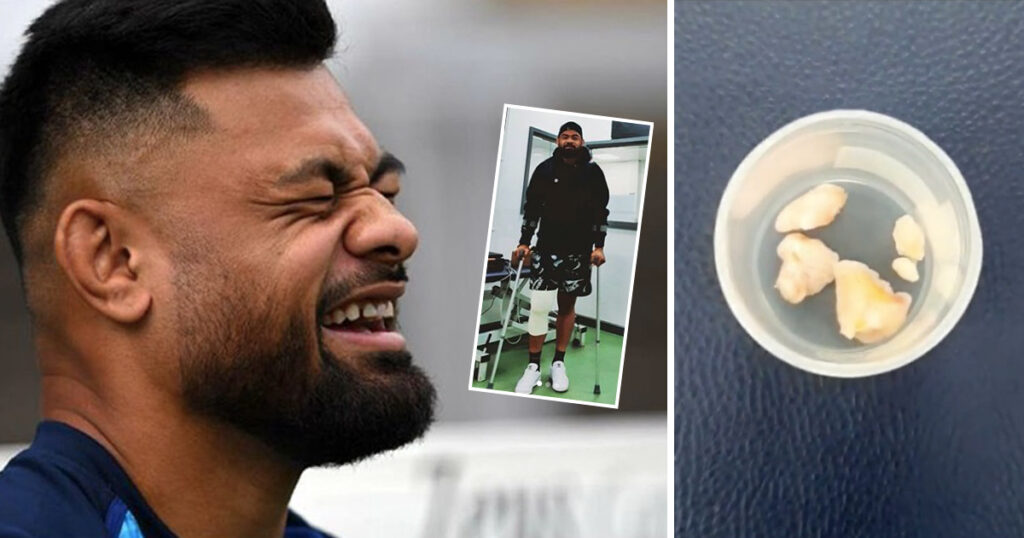 Leicester Tigers flanker Jordan Taufua has provided an update on his health after undergoing surgery on his knee this week.

The Kiwi, who arrived at Welford Road in 2019 from the Crusaders, said in an Instagram post that the surgery went well, although he is now set to miss the remainder of the season for the Tigers.

The 28-year-old shared a photo of himself in crutches with his right knee strapped, as well as a beaker containing some of the debris from his knee after the operation.

Despite this setback, the loose forward is remaining positive, and shared this message:

“Gutted that my season has been cut short but supporting the boys from the sidelines! Surgery went well now on the Road to Rekavary.

“In times like these it’s easy to fall into a dark place with setbacks, things not going your way and that’s OK. But it’s also a great opportunity to set new goals, SMASH those goals and become a better version of yourself.”

Click the right arrow to see the debris from his knee

Gutted that my season has been cut short but supporting the boys from the sidelines! Surgery went well now on the Road to Rekavary 👀 In times like these it's easy to fall into a dark place with set backs, things not going your way and that's OK. But it's also a great opportunity to set new goals, SMASH those goals and become a better version of yourself. 💯 Keep on 😁 📸 @olliechessum

Taufua will have to watch from the sidelines when his teammates take on Toulon at the Stade Felix Mayol tomorrow in their Challenge Cup semi-final encounter. His absence will be felt on the Cote D’Azur, as his physicality has been a real asset to a Tigers team that have struggled this season.

On the domestic front, Leicester have two remaining fixtures against Bristol Bears and Harlequins in the Gallagher Premiership in which Taufua will be absent. However, with Saracens already destined to be relegated this season, these are effectively dead rubber games for Leicester.

This means Taufua’s last game of the season was the derby victory over the Northampton Saints two weeks ago, after the quarter-final against Castres last week was cancelled.

His focus will now be on the new season that is set to start in November.