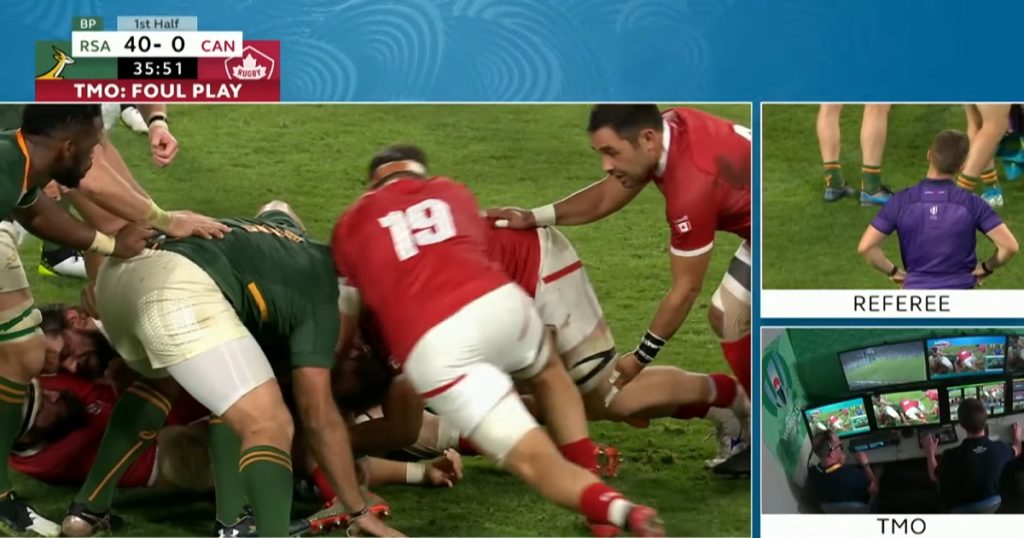 South Africa brushed aside 14-man Canada 66-7 in their final Pool B match of the Rugby World Cup in Kobe City to book their place in the quarter-finals.

Josh Larsen was sent off in the first half for his no-arms charge into a ruck as Canada were deep in South Africa’s 22, making an already uphill task even harder for Kingsley Jones’ men.

Referee Luke Pearce handed Larsen his marching orders after he deemed the replacement made contact with the head of Thomas du Toit in the 35th minute.

It made life even more difficult for the Cannucks, who were trailing 40-0 after South Africa made a blistering start to the match.

Scrum-half Cobus Reinach scored the tournament’s fastest-ever hat-trick, which was done inside the opening 20 minutes. The Springboks touched down a further four times as they stormed to a 47-0 half-time lead.

Things looked ominous for the Canadians, but they fought superbly to score their one and only try courtesy of Matt Heaton at the start of the second period.

South Africa were less dominant in the second half but still went over for three more scores to round out a comfortable victory.

Canada turn their attentions to their final game against Namibia on Sunday, as they look to salvage some pride, while South Africa will be eager spectators in the last Pool A matches to find out their opponents in the last eight.