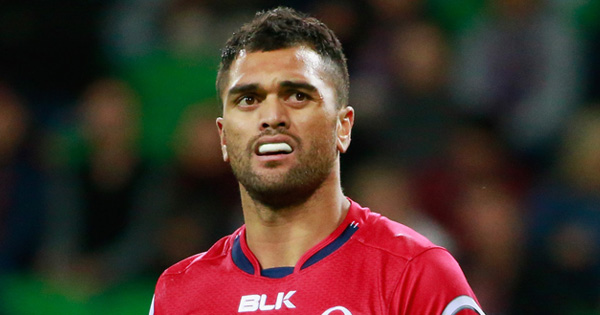 The Reds are on the ropes, winless since round 2 and facing a huge injury crisis. But perhaps the most interesting subplot of the situation is the subsequent fast tracking of Karmichael Hunt’s shot at atonement. Josh Bristow takes a closer look.

With James O’Connor out for one week Hunt has regained the starting fullback position for Queensland’s match against the Bulls on Saturday.

It will be the first real step on the former league internationals path to redemption.

It’s not hard to forget the gut punch Queensland fans received when news broke that Hunt was to be charged with cocaine supply.

Here was the teams biggest off season signing in years, an athlete who could provide the power, finesse and experience from Rugby League combined with four years worth of kicking lessons in the Australian Football League.

The only other player to have travelled the same path to Super Rugby is Israel Folau, who became the best back in Australia within six months.

Combined with a 2014 season where Queensland finally came crashing down to the reality of a post 2011 world, it was hard not to be excited.

With fans finding the shock of the situation hard to deal with, the decision by the ARU and the QRU to stick by Hunt angered many but on reflection it has been the right decision.

Admittedly if the Reds weren’t circling the wooden spoon Hunt would be playing Rugby League in Northern England faster than one could utter “Wendell Sailor”.

The full story won’t be finalized until the five Gold Coast Titans Rugby League players who were charged alongside Hunt have had their day in court, but Karmichael’s rap sheet is hardly gripping reading.

Karmichael pleaded guilty to possession of cocaine, which is a crime for sure, but one that the legal system decided required no conviction and a paltry $2,500 fine.

It’s a far distance away from when the Queensland Crime and Corruption Commission triumphantly declared that Hunt and other footballers would be charged with supply of the class-A drug.

Bizarrely, Hunt was initially charged with supplying himself – another sign that this ‘drug-bust’ (one with a guaranteed media interest) might have been more about appearing to do something on the QCAC’s part than actually safeguarding the community.

Hunt admits he took the drug on a month long end of season party that concluded his final season in the AFL.

Therefore calls for him to be immediately sacked a la Wendell Sailor were an overreaction.

Sailor was sacked because Cocaine is considered a performance enhancing drug and he was caught mid-season which gave the ARU immediate cause for dismissal.

Out of season and committed when he wasn’t technically an employee of the Reds, Hunt’s transgression is more of a moral quandary.

Undoubtedly drugs are a terrible scourge on modern society but the reality is if we were to sack every player who has ever tried drugs socially, we wouldn’t have a competition.

Karmichael’s real punishment is the difficulty he will now have attracting third party sponsors and the decreased opportunity to prove himself worthy of international honors.

Because Hunt can play, don’t kid yourself thinking anything else.

The only question is whether the woeful Reds pack can give him and Quade Cooper the platform they need to shine.

That leaves the journey to win back the minds of Reds and Wallaby fans, many of whom believe the slap on the wrist given to Hunt shatters the integrity of both organisations.

If Hunt makes the World Cup squad expect another outpouring of moral crusaders but surely if that happens he will have earned it through his actions on the field.

It is hard to recall if there was the same amount of disappointment in Kurtley Beale’s swift reinstatement last year.

The Jeremy Clarkson of Australian Rugby has built up his own rap sheet of incidents including punching a co-worker, sexual harassment and substance abuse that directly resulted in physical harm to others.

Despite this most forgave Beale after he played a huge role in the Waratahs Super Rugby triumph and put in solid performances for the Wallabies last year.

This discrepancy between the moral outrage towards drug use and the muted response to sexual harassment and alcohol abuse is another topic and an issue that transcends the world of sport, where players are forgiven if they can throw a ball around.

Therefore it is up to the individual to decide where they place recreational drug use on the sliding scale of unforgiveable acts, but you can be sure if Karmichael Hunt scores the winning try in a RWC final Australian fans will be cheering in unison.

Come Saturday evening, that’s all up to Hunt.