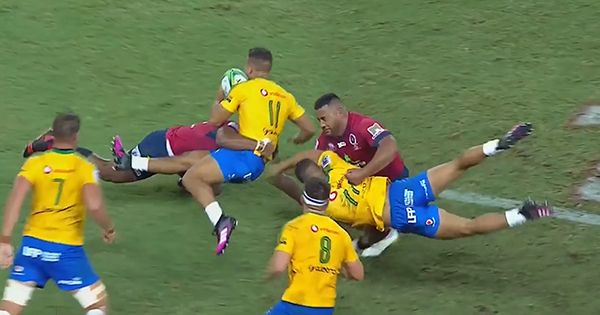 The Reds came from behind to beat the Bulls 20-14 in round four of Super Rugby in Brisbane. Their physicality was an impressive aspect of the game, as you can see here with dominant tackles by centre Samu Kerevi and powerhouse prop, Taniela Tupou.

Unfortunately for young Bulls winger Duncan Matthews, he was the recipient of two of the biggest hits, as both Kerevi and ‘Tongan Thor’ laid into him, with the later in particular throwing his sizeable frame about.

“Ballymore is my second home and the Reds are like my second family,” he said. “This is where I started my professional career and I really want to contribute to the team.”

“We’re learning a lot from Brad (Thorn). He knows how to win. We’re a young team who are working hard for each other, it feels like we are heading in the right direction and I want to be a part of that.”

Signed straight out of school, Tupou made his Super Rugby debut in 2016 and last year earned his first Wallabies cap, as well as having a run out for the Barbarians in Sydney.

Known for his big carriers and deft footwork for a man weighing around 135kg’s, he has worked hard to be a complete rugby player, as coach Thorn can testify to.

“He might still be known for his big runs, but he’s worked incredibly hard to develop the rest of his game and I’d like to think he’s known as a tighthead prop and a scrummager now too,” Thorn said.

“Taniela is only 21 and he’s developed a lot since joining the Reds as an 18-year-old. We’re pleased he has committed to Ballymore and the team for another two years and it’s exciting to think how much more development he has in him if he continues to work hard.”

His tackle on Matthews looked borderline illegal, as he simply ran into him before wrapping his arms. It demonstrated the size difference between the two, and the power of the young man.

The win places them in second on the Australia conference, behind the Melbourne Rebels.