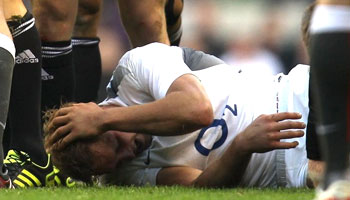 All Blacks hooker Keven Mealamu will face a IRB judicial hearing in Glasgow tomorrow after he was cited for headbutting Englands Lewis Moody at Twickenham on Saturday. If found guilty of striking with the head, it will no doubt be the end of Mealamus tour.

While it wasnt clear at first view, telelvision replays surfaced randomly a full five minutes after the incident took place as Moody looked groggy and appeared to be worse for wear from something. What the replays revealed were Mealamu holding onto the England flanks jersey, then driving into the back of his head with his own.

Citing commissioner John West of the IRB charged the New Zealand hooker with striking with the head on Sunday, leading to a possible suspension that would see him out of the game for at least a month if found guilty.

All Blacks coach Graham Henry has come out in defense of Mealamu, saying hes one of the cleanest players in the world. British & Irish Lions fans may well disagree with that after an incident involving Brian ODriscoll in 2005 that still gets brought up on regular occasion.

Moody has since been suffering from general soreness so England have brought in Tom Wood as cover ahead of their meeting with Australia this coming Saturday.

Bakkies Botha was handed a nine week ban for his headbutt on Jimmy Cowan in the Tri Nations, which doesnt bode well for Mealamu as this appeared to be fairly similar.

An interesting aspect of this incident is the way that the commentators from the two countries had such different reactions. The English commentators naturally expressed what they saw, while there was deathly silence in the New Zealand commentary box.

Grant Nisbett in particular was one of the most outspoken during the Botha incident. “Not the smartest thing to do.. a headbutt into the back of the head,” he said at the time. There was also a bit of talk back then about replays being shown over and over. It looks like the Sky Sports producers have taken a leaf out of their NZ colleagues book.

For interests sake, this video features both versions as it’s probably quite amusing to some of you. Regarding the suspension though, is this as clear cut as the Botha headbutt, or could there be some kind of other explanation for what Mealamu was doing?

UPDATE: Mealamu was suspended for 4 weeks, reduced to 2 following an appeal.