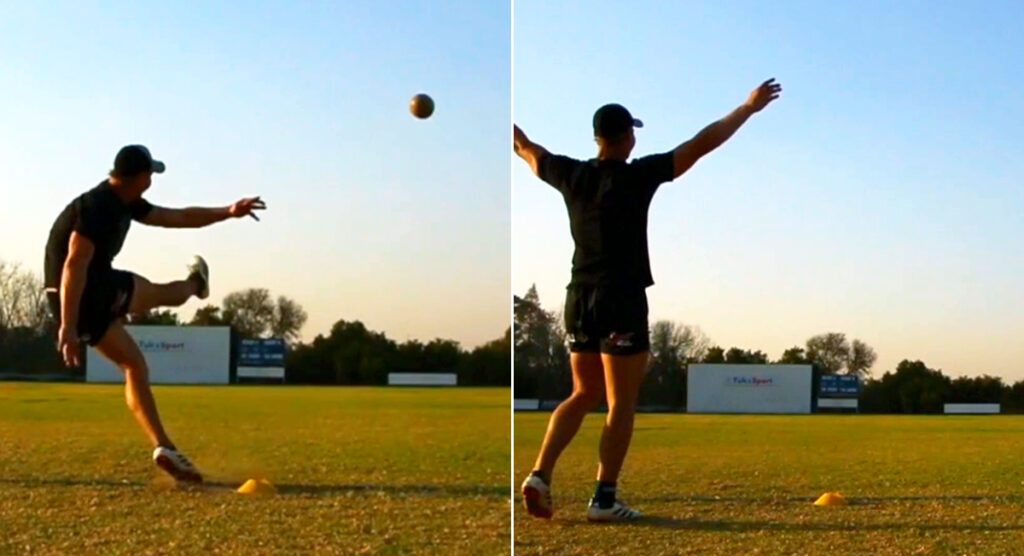 A professional kicking coach has slotted his longest kick ever, claiming to reach the 80 meters mark with a revolutionary kicking method that can help others to gain length and accuracy on their kicks in both Rugby and American Football. Footage of his latest effort can be seen below.

An American Football and Rugby kicking coach who has had trials with teams in the NFL and CFL in the past four years, Wihan van der Riet says that this kick is by no means an everyday occurrence. In fact, he had never reached that distance before.

However, since mastering a kicking technique called the Proform method with long time coach and former NFL goal kicker Mike Hollis, his kicking has become so powerful and effective that he has since gone 80 meters again twice.

“The ball was placed about 25m infield from the left hand touch line on the 22m… You can see the 15m line intersecting with the 22m line on the left of the screen,” Wihan explained to us.

“Up until this point I had never done it before. I had kicked and kicked and kicked in the pursuit of this but on this day it all just went the way it should’ve. There was a sudden gust of a tailwind that picked up as soon as I kicked it.”

Van der Riet says that rugby is light years behind in terms of kicking techniques, and the rugby world doesn’t like change, even if it’s clearly better.

“I switched from Rugby to kicking American footballs 6 years ago. I’ve been trying to make a name for myself by kicking stupendously big kicks… but somehow not many people have paid much attention. Proform is the ultimate kicking technique. ALL KICKS are STRAIGHT LINES! The distance is purely an example of how efficient and effective Proform is.

“I coach Football kickers full time though. They really understand the benefits of really good form.”

He added that the kick might even be over 80m, and says that his methods apply whether you’re kicking a rugby ball or football, from angles or distance.

“To summarize, Proform is a very detailed, scientific kicking technique. It’s the most efficient way to kick a ball. We offer 12-week courses online, the next course starts on the 1st of August.”

While the footage is not entirely conclusive and perhaps a different camera angle would be better to see, Wihan has promised us more videos and as he continues to master the art, and no doubt more mammoth conversions.