Knocked out yet again, George North's regular concussions surely signal the end of his career 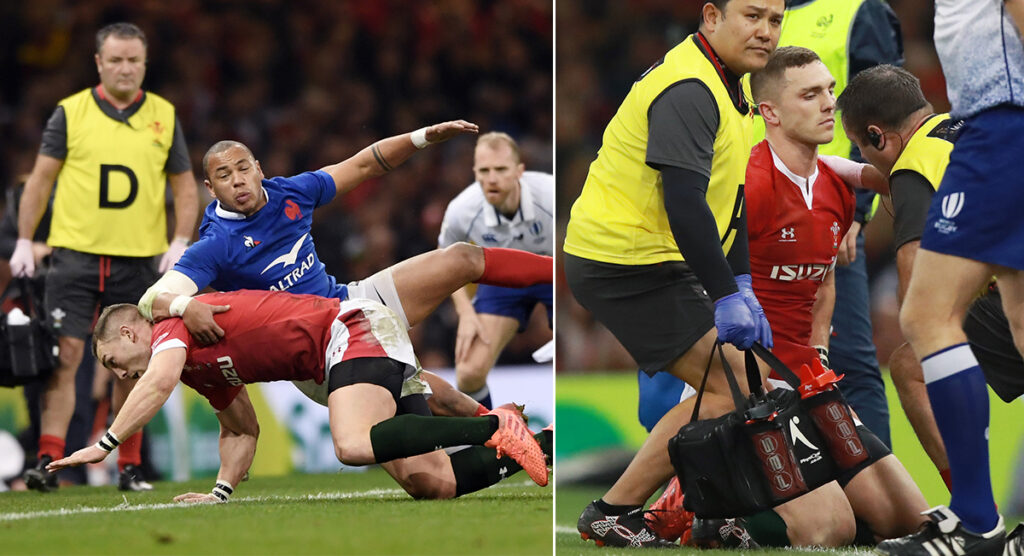 The sight of George North splayed on the floor after a knock to the head is one that Welsh fans, and those all round the world, have grown all too familiar with.

The 27-year-old came off the field in the eleventh minute against France on Saturday after clashing with Gael Fickou in the air, raising fresh concerns about his well-being.

North has a long history with head injuries, and this latest concussion means he has suffered at least one a year since 2015, where he had a sustained spell on the sidelines with Northampton Saints because of it.

While this latest injury may prove problematic for Wales in the immediate future with a visit to Twickenham in a fortnight, there are greater worries surrounding the two-time British and Irish Lions tourist.

Fans are suggesting that it’s time he hangs up his boots.

I know this is controversial but I’m just gonna say it: I don’t want to see George North play rugby again. It’s actually terrifying to see him out cold and wonder if this is the time that he doesn’t get up. He’s been beyond amazing, but enough is enough #WALvFRA

Rugby is just a game. The important thing today is the long term health and welfare of @George_North I wish him a full and speedy recovery

There are those that would like to see North retire after this latest incident, while many are questioning his future, and are sure that is what North will be doing himself.

I bet George North is sitting on the bench thinking is this it for me, the poor bloke has seen more star’s than Roger Rabbit. Future mental health (CTE) is scary and the @WelshRugbyUnion should be helping him with the next stage of his career #WALvFRA

When will George North be allowed to make the sensible decision about his career. He’s had more head injuries than I’ve had got dinners, yet we are worrying about kids heading a football! Same goes for Jonny sexton of Ireland #walvsfra

In this current climate, trolling and abuse on social media are a topic of discussion, but there is nothing malicious in this circumstance, as these are genuine concerns about the winger’s welfare. This is not something that is strictly from Welsh fans either, as no supporter, regardless of nationality, would want to see a player struggle the way North has at times.

Horrible to see! Hope George North makes the right decision regarding his future! Such a good player but only so many concussions you can take! https://t.co/xPdLa6ATii

@George_North you are and will always be a Welsh great. You have to think of life over rugby. Please don’t risk your health for a game. Speedy recovery. 👍💪

With 40 tries for Wales, he is still 18 behind Shane Williams, but that target will be in his sights as well.

As an Englishman huge respect for everything @George_North has achieved in his career but maybe it’s time to call it a day. One to many concussions and discover life after rugby before permanent damage is done.

I don't know a huge amount about concussion, but seeing George North knocked out for a few seconds AGAIN today was horrible scary to see! He has been amazing for Wales over the last 10 years, but his health and wellbeing has to come first surely? 😔 #WALvFRA #georgenorth pic.twitter.com/ZJzNjJCIYP

However, there are factors that are out of his control, and with every concussion, the calls for retirement will grow. He will likely see specialists over the coming days to assess what happens next, and whether that means another extended break away from the game, the rugby world will want what is best for him.