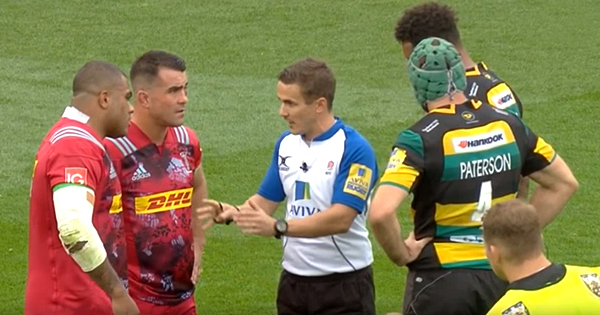 England and Harlequins prop Kyle Sinckler has an anxious wait to see if he will be found guilty of making contact with the eye area of Northampton Saints second rower Michael Paterson. Paterson made the claim during their Aviva Premiership clash this past weekend.

TMO footage was fairly inconclusive, although Sinckler could be seen pulling Paterson’s headgear off his head, then placing his hand very close to the eyes.

Paterson himself told referee Luke Pearce that he was ‘100 percent’ sure that he felt a finger in his eye, which prompted the TMO review and a number of camera angles to be shown.

Only a penalty was given, but as was clearly explained at the time, the post match citing process is there to find incidents such as this one.

The Independent Citing Commissioner, Chris Catling, did indeed cite Sinckler and he is due to appear before a RFU disciplinary panel on Tuesday, charged with allegedly making contact with the eye and/or eye area of Paterson, contrary to law 10.4(m).

The hearing will take place in Bristol on Tuesday 3 October at 6:30pm.

Harlequins boss John Kingston denied any wrongdoing: “Unequivocally, it was not a gouge. Absolutely not. Kyle said he made contact with Paterson’s head gear.

“He can’t do that. There was a purge on it a couple of years ago because it’s the sort of thing that cheeses people off, so leave headgear alone.”

Kingston went on to state that Dave Ward received the black eye – that can also be seen in the video – due to some foul play that was not spotted.

“I have to say… my hooker has got a rather nasty eye and I know how it happened because he’s told me – and I believe him. I’m pretty disappointed about that and he’s not happy about it,” Kingston added.

In the same match, Harlequins’ George Merrick charged into a ruck illegally during the closing stages, and has since been issued a citing commissioners warning, which is the equivalent of an off-field yellow card. That was for contravening law 10.4(h).