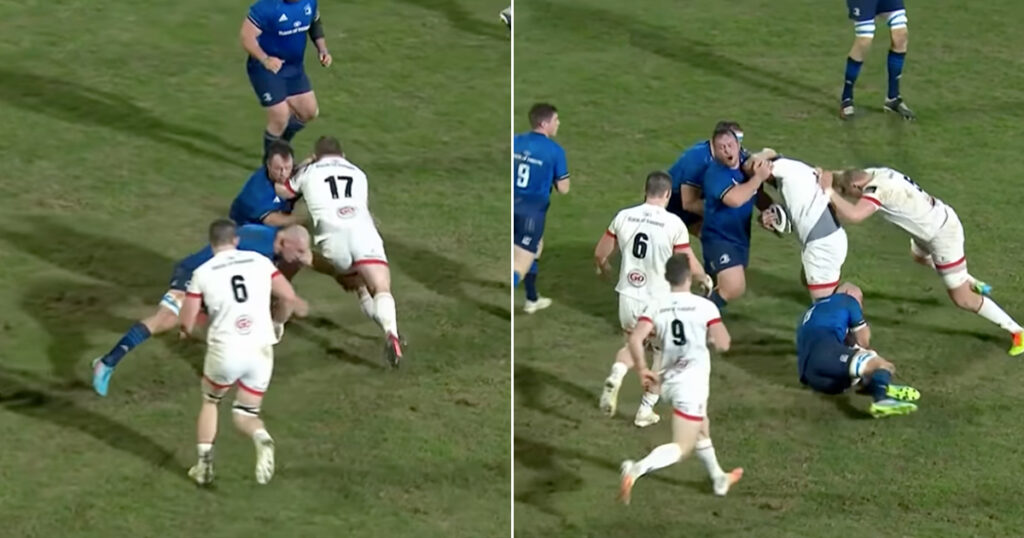 Ulster front rower Andrew Warwick received his marching orders against Leinster this past weekend after he had attempted to fend off an opposition tackler with his forearm. The result was a red card and subsequent suspension.

Referee Frank Murphy was immediately alerted to the incident by appeals from prop Ed Byrne and upon further inspection, felt that a Yellow card for use of the elbow was the correct call.

“I’m looking at a yellow card because I don’t see a high degree of danger, he just slips up over his shoulder with the forearm close to the actual point of the elbow.”

However, just before making his decision, he was persuaded by the TMO to have another look and escalate it to Red due to the view that the elbow made contact with the throat.

Warwick faced a Disciplinary hearing with the Panel consisting of Roddy MacLeod (Chair), Frank Hadden and Beth Dickens (all SRU), who concluded that an act of foul play had occurred.

“The Panel had regard to World Rugby’s notes to the application of Law 9.11 and considered that it was not bound to impose a mid-range entry point.”

Law 9.11 states: Players must not do anything that is reckless or dangerous to others.

“The Player is suspended from participating in the next two meaningful matches. Should a game be cancelled or postponed during this window of games, the player and PRO14 are to submit updated fixtures to the Disciplinary Panel so the return date can be advised. The Player is free to play from midnight on Sunday, 21 March 2021 and this sanction ensures he will be unavailable for two games.”

He will miss the Guinness PRO14 fixtures against Dragons and Zebre.