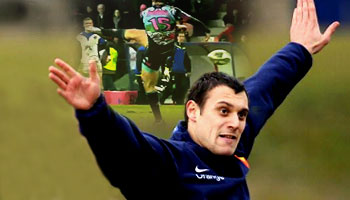 Not too long ago we were singing the praises of Stade Francais fullback Lionel Beauxis as he showed us a sublime piece of skill against Bath in the Heineken Cup.

When it happened it was one of the most sensational pieces of skill (and camerawork) we’d seen in some time, but Beauxis has managed to undo all that in an instant, as he’s gone from hero to zero with this faux pas against the same team .

He attempted to volley the pass from make-shift scrumhalf Hugo Southwell, resulting in a fly-kick that connected with nothing but the mist of Paris.

Luckily for him the moment of madness didn’t cost his side the win, as they came out 15-13 winners despite scrumhalf Michael Claasons diving on the loose ball to score in the mud.

It’s one of the strangest things we’ve seen on a rugby field, with the fly-hack being described by the commentators as an own-goal, if there were such thing in rugby.

While even the best make mistakes on occasion, it shows you what a leveller international sport can be. At one moment you’re on top, the next you’ve made an embarassing blunder.

Perhaps in future Beauxis should stick to the tried and tested option of actually catching the ball.