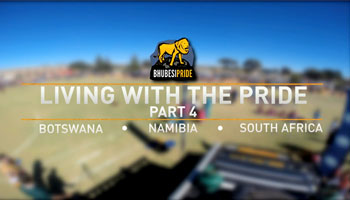 This is the fourth and final video from Bhubesi Pride’s historic African rugby coaching project in 2014. In the video we see the coaching volunteers making an impact in Botswana, Namibia and South Africa, where they were joined by former Springbok prop, Ollie Le Roux.

We will catch up with the 2015 team here on RD shortly, but for now, above is the culmination of another fantastic year’s work, and a look at how the 2014 project finished up.

As well as working with former Springbok players and coaches, the team were priviledged to take to the field at halftime during a Springbok Test match in Port Elizabeth.

Find out more about Bhubesi Pride, and apply to coach in 2016, by visiting RugbyinAfrica.org