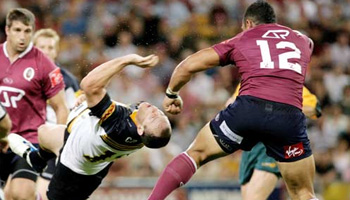 Brumbies vs Reds (Super 14) from this weekend. Low scoring game, but pretty eventful. A bit of a punchup in the first half, and then this in the second.

Stirling Mortlock cops one in the face. The fact that Lloyd Johansson has forearms the size of my thighs makes the impact serious. Mortlock is knocked out cold and is taken from the field.

Johansson faced a SANZAR Judicial Officer in Brisbane & was given a two week suspension. He admitted the tackle was dangerous but stated it was not intentional but was an instinctive reflex action on an opponent taking an inside pass.

The referees assessment of the tackle was exactly this, which impacted on the decision to issue a yellow card and nothing worse.

The Judicial Officer however determined that the tackle was recklessly dangerous and a further penalty should be imposed as there was a need for a deterrent to combat this type of offence.

But for the facts that Johanssons previous conduct had been exemplary and he had shown genuine remorse and had apologised personally to Mortlock, a longer suspension may have been appropriate.