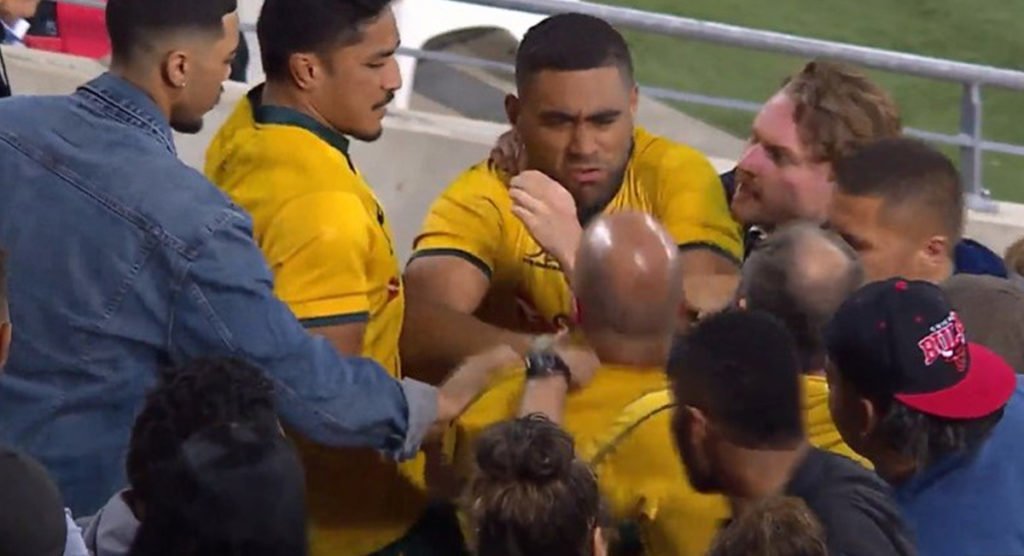 Wallaby fortunes have reached a new low with their loss to Argentina on the Gold Coast. Not only did Australia lose their third match of the Rugby Championship 23-19, a disgruntled fan then decided he’d had enough and confronted players after the match.

Things took an even uglier turn as a scuffle ensued in the stands, ending with the fan’s ejection and Lukhan Tui’s apparent withdrawal from the squad.

Argentina won on Australian soil for just the second time since 1983. The win was coming, as Argentina have been playing an exciting brand of rugby since they defeated South Africa at home in round two. After a thrilling encounter with the All Blacks, Los Pumas were clearly ready to send another message in the buildup to next year’s World Cup.

Australia had a late chance to crush Argentine dreams when the ball found Israel Folau in space out to the right. He ignored a wide-open Bernard Foley, who would’ve easily scored in the corner. Instead, Folau had a go at the line and knocked on when he was met by a wall of defenders.

Argentina escaped with a hard-fought victory but the drama was far from over, as an upset fan scuffled with Wallaby forward Lukhan Tui in the stands.

In a bizarre turn of events, Tui’s sister was apparently shoved, prompting the big forward to react in kind. After a few moments, the fan was then forcibly removed from the stadium.

After the match, head coach Michael Cheika revealed that – due to the incident – Tui had announced his desire to step away from the game. Tui had already had an emotional week, losing his stepfather. The Wallabies wore a black arm band during the match in his honour.

“The player has said in the dressing room that he won’t be playing anymore, so I hope that fan is happy.” 😳

Michael Cheika defends Lukhan Tui after he was involved in an altercation with a fan after the @qantaswallabies‘ defeat to @unionargentina. 👊💥https://t.co/kTZvuV2PJN pic.twitter.com/CwIPwKJO5P

When asked about whether Tui will finish the Championship, Cheika said: “We’ll see how the week pans out and go from there. I’d say it’s unlikely, based on what we spoke about last night.”

Tui is involved in planning his stepfather’s funeral so is supporting his mother and younger siblings. He maintains that he will take a break from rugby.

NO PUNISHMENT FOR FAN

Rugby Australia CEO Raelene Castle has said that Tui does not want to take the incident further, so the ‘fan’ will face no punishment.

“Two fans came into the area where players families were gathered and were arguing and using offensive language in criticising the players over their performance. One of Lukhan’s young family members was physically caught up in this exchange and this prompted the reaction from Lukhan.

“He has indicated that he does not wish to pursue the matter any further and therefore no further action will be taken by Rugby Australia.

“The interaction between players and fans is an extremely important part of sport and we never want to see an incident like this again,” she added.