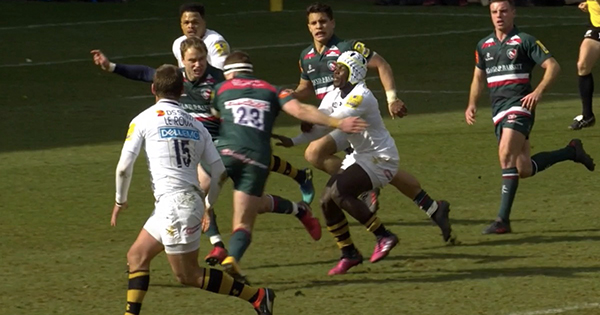 Leicester Tigers replacement back Nicholas Malouf has been sanctioned for the high tackle he made on Christian Made during Sunday’s Aviva Premiership contest. He was cited then last night received the bad news.

Malouf was only on the field because Wade himself had knocked out winger Jonny May after a strong carry. May was out cold, so left the field, with Malouf his replacement.

Ten minutes later, Malouf came in for the tackle as Wade attempted to spread the ball wide, but made contact with the Wasps flyer’s head as he turned into the tackle.

After pleading guilty to the charge, an independant disciplinary panel handed down a three-week suspension, meaning he is only free to play again on 17 April 2018.

“The player accepted that he had committed an act of foul play which passed the red card test,” panel chair John Brennan said.

“The panel found that the player had struck the Wasps player’s head. This required a mid-range entry point in accordance with the sanction table.

“Given the player’s guilty plea and his clean disciplinary record the panel allowed full mitigation of 50%. He was suspended for a period of three weeks.”

The challenge appeared to be at chest height but with Wade moving down slightly and Malouf fairly unsighted, his shoulder made contact with Wade’s face or chin. Therefore, he was fortunate to not be red carded on the day, as the TMO and referee took a fairly lenient stance.