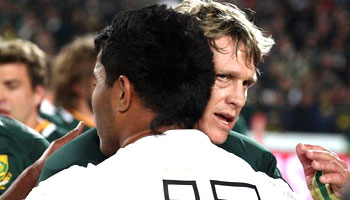 Expected to make a big impact during the three-Test series against the Springboks, England’s powerhouse center Manu Tuilagi showed patches of what he’s capable of, but was for the most part contained by the midfield combo of Jean De Villiers and Francois Steyn. Here is a quick look back at some of the best collisions from the first Test.

De Villiers, who was playing in his first match as captain of the Springboks, said prematch that he was expecting a tough physical challenge when going up against Tuilagi.

“Manu Tuilagi has shown he is a massive threat on attack and defensively he is very solid as well. Frans and I will have our work cut out tomorrow. It is going to be a tough day at the office but it is a challenge we are looking forward to.

Both players did exactly that, with Tuilagi perhaps getting the points victory in their first meeting, but De Villiers coming out winner over the series, having successfully limited the damage the Samoan wrecking ball managed to inflict.

Below is a quick look at some of the big charges from both players, and includes a try saving tackle from Tuilagi on Pierre Spies that wasn’t replayed during the match, but was excellent.

You can have a browse through the Related Posts below the video for the match highlights, as well as some of the best and worst moments from both Tuilagi and De Villiers over the years.