Martin Johnson escapes with warning after nasty throat stamp in 1999 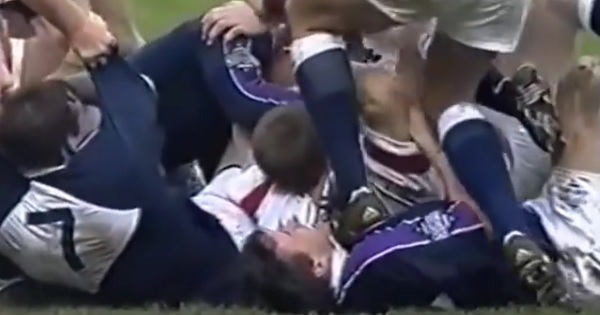 The Calcutta Cup between Scotland and England is the oldest international fixture in the history of the game and the two sides face each other again this weekend in another eagerly anticipated encounter.

Naturally, with all the history over the years, there has been a fair share of friction between the Auld Enemies, with things taking a slightly different turn during Scotland’s last tournament triumph in 1999.

Scotland won the last-ever 5 Nations title in the final round of the championship but crucially slipped to a narrow 24-21 defeat at the hands of Clive Woodward’s England at Twickenham in round two.

It was a typically fractious affair, with lock forwards Scott Murray and England captain Martin Johnson getting to know each other particularly well.

Johnson was perhaps counting himself lucky the game’s new-for-2000 sin-bin rules hadn’t been introduced a year early after receiving a yellow card for stamping on the throat of John Leslie.

While Johnson didn’t appear to strike Leslie with any substantial force, the nature of which he did left England fans worrying about the colour of card dished out by referee David McHugh of Ireland.

Luckily for the home crowd, it was a mere yellow card warning. With the game nicely poised at 17-14 in favour of England, a red would surely have handed the Scots the initiative and possibly the Grand Slam.

Scotland sniffed an opportunity of a first Twickenham win since 1983 – a stat which still remains – but ultimately paid the price for missed kicks at goal. Winger Kenny Logan missed a couple of penalties which would have given Jim Telfer’s men the victory.