Mathieu Bastareaud's physical impact on the 2015 Six Nations so far 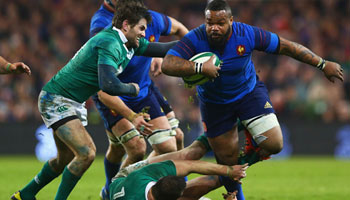 There is no doubt that when you’re 6ft tall and weigh 18 stone, you are going to make an impression on the midfield. French centre Mathieu Bastareaud has done just that during this year’s Championship, so here is a quick look at some of his best moments.

Despite France not doing too well so far this Six Nations, one thing is for certain – if you are going to try and tackle Bastareaud, you might want to bring a friend as well.

The big, 26-year-old Toulon centre has made it known in recent weeks that he isn’t happy with France’s performances as of late, saying recently:

“I have been through that before and it is not nice, but we have to put ourselves in the fans’ shoes. We arrive every time with plenty of promise but then we are not winning matches.”

France lost last weeks game to Wales 20-13, leaving them 4th in this year’s table so far, with their only victory coming against Scotland, who they beat 15-8 at home.

France themselves know they have a big game facing them in a few weeks time against Italy, a team who will be brimming with confidence following their victory over Scotland at Murrayfield.

Whilst we can’t call who will win in Rome, one thing is certain – Bastareaud will be there to punch holes in the midfield! See some of his better carries, tackles and turnovers in this quick compilation.