Michael Hooper cited for off the ball punch against Argentina 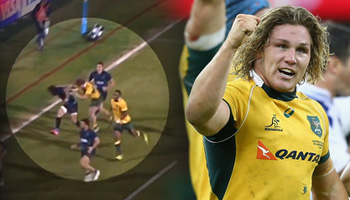 Wallaby Michael Hooper has been cited for striking following an off the ball incident during Australia’s 34-9 Rugby Championship second round victory over Argentina in Mendoza. Hooper will appear before a SANZAR disciplinary hearing on Wednesday this week.

Hooper played provider as lock Dean Mumm went in for a try in the second half, but while in support he was held back by flyhalf Nicolas Sanchez.

As you can see in the footage, Hooper lashed out, making contact with Sanchez, who dropped and needed to be treated for a few minutes after the try.

It wasn’t spotted by referee Jaco Peyper or the other officials, so the try stood and Hooper played on. Post match, following initial consideration by the SANZAR Duty Judicial Officer Chris Morris, Hooper was cited and will appear at a SANZAR Judicial Hearing, charged with commiting foul play.

Hooper is alleged to have contravened Law 10.4 (a) Punching or striking: A player must not strike an opponent with the fist or arm, including the elbow, shoulder, head or knee(s).

While some may feel that street justice is permitted when players get held back illegally, taking the law into your own hands is not allowed. Hooper is likely to receive a significant ban.

UPDATE: The hearing has been adjourned until Thursday 30 July 2015

Note: If the above video doesn’t work for you, you can see another version here, with comments from Phil Waugh

Away from the furnace of the Lions versus Springboks war of words, forwards coach Robin McBryde was glad to take a call from Mike Cron.

'Exit rumours': Ex-Lions back on 'real' reason for Erasmus antics

Rassie Erasmus has stoked controversy with his antics, but an ex-Lions player has claimed the Springboks boss has an ulterior job motive.

With the Lions are on the cusp of a rare Test series win in South Africa, talisman Maro Itoje has been doing some extra homework this week.