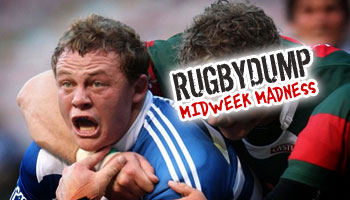 The Currie Cup is well under way in South Africa, with two rounds of play already having taken place. Here is a quick, funny clip from the match between the Leopards and Western Province that is user submitted and worth checking out.

Over the years the call has gone out to you, the rugby loving fans, to get in touch whenever you spot something you think should be shared with the rest of us around the world. It’s your valuable input that drives the site, and can determine what does and doesn’t get featured.

This was the case today when I received an email from someone who had watched this low key game in round two, a mismatch that Western Province (predominantly the Stormers in Super Rugby) played against the Leopards in Potchefstroom.

Province picked up their first win of the campaign, coming away with a convincing 47-9 scoreline. Early in the second half the frustration began to show for the home side, as is evident in the below clip when number eight Morne Hanekom tossed the ball in the direction of South African u20 flanker Siya Kolisi. Unfortunately for Kolisi, he wasn’t looking at the time.

Whether it was deliberate or not, referee Pro Legoete – who infamously pinned Waratahs Pat O’Connor for a headbutt earlier in the season – took exception to it, and actually penalised Hanekom for deliberate foul play.

There’s something really funny and bizarre about the whole situation, so take a look and see for yourself. Also, remember that if you watch a lot of games, make note of when certain things happen and get in touch so we can check them out, and hopefully share here on RD.