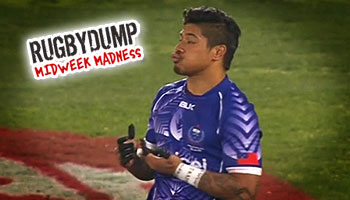 One of the biggest talking points of the Springboks vs Samoa game on Saturday was the indecent ball handling by James So’oialo. The Samoan fullback appeared to get to grips with the South African hooker, but he was later cleared of any wrongdoing.

As mentioned previously, it was a turbulant game with a lot of big contact, but things crossed the line – or went below the belt – when So’oialo grabbed Adriaan Strauss in the nether regions.

Unsurprisingly, hooker Strauss reacted angrily, chasing after the Samoan fullback and calling him what looked like a ‘Fokken poes’ [ask the nearest South African for a translation].

After the TMO had a look and described the offence as grabbing a player in an ‘indecent manner’, we might have expected a card to be shown, but So’oialo was only penalised.

A citing and disciplinary followed though, and after being charged under Law 10.4(m), committing an act contrary to good sportsmanship, the citing was dismissed after Judge Jeff Blackett (RFU) decided that the contact was accidental.

“If I am to uphold this citing I must conclude that the Player has lied to me,” said Judge Blackett.

“My assessment of the Player is that he is honest: he immediately accepted that he had grabbed an opponent’s testicles – he did not attempt to dispute that fact – and he said that there is no room in the game for insidious acts. Further there was no attempt to weaken the evidence given by Strauss who himself accepted that there was probably no malicious intention.

“In those circumstances I determine on the balance of probabilities that the Player did not intend to squeeze Strauss’s testicles, nor were his actions reckless.

“In the dynamic situation of a ruck in which he was attempting to clear out an opponent he attempted to grab hold of his shorts and accidentally grabbed his testicles,” he concluded.

It was difficult to see on camera at first, as the comical nature of the whole situation was compounded by the fact that players seemed to get in the way at exactly the right moment.

The reaction from Strauss explained a lot though, and the way the South African’s handled it was quite funny to see, as they targeted a high ball on So’oialo directly afterwards.

Luckily for him, perhaps deliberately, he dropped it. He left the field a few minutes later.