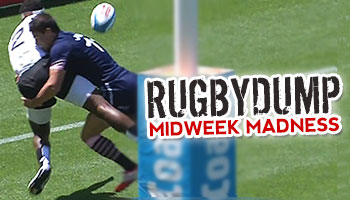 Over the years Sevens has dished up some hilarious bloopers, as a few tryscorers have been way too casual over the tryline. This was the case at the Gold Coast Sevens last weekend, so here is a look at it, as well as a few other memorable blunders.

If you weren’t able to follow the tournament on the weekend, we posted Gold Coast Sevens Highlights, which cover Day One and Two, including all the finals and a few extra clips in for good measure. One of those was this screamer from Fijian flyer Semi Kunatani, who was all too casual.

It was a combination of his complacency and the quick thinking from Scotland’s Lee Jones, who spotted that the speedster was taking his time about things, as well as showing the ball some love. Jones swooped in with a powerful, well timed hit, so the ball popped loose and the try was wasted.

We’ve seen similar bloopers on the Sevens circuit before. One thinks back to England’s Fijian born Isoa Damudamu and his shocker at Twickenham many years back, also kissing the ball (goodbye).

More recently a Japanese player celebrated a try at the Hong Kong Sevens with a huge dive, but left the ball behind, resulting in a few blushes. There were also two howlers at the Limerick World Club 7’s in August, coincidentally also featuring a Fijian player.

Back in 2008 Wales’ Tal Selley at least made the effort to get the ball down, but was caught from behind by USA speed merchant Zee Ngwenya, who knocked the ball out of his hand.

So we’ve seen it before and we’ll see it again. Schoolboy errors, but fun to watch and this was a fantastic tackle by Jones. Fiji won the match 40-7 though, so probably weren’t too bothered.

View all of the discussed bloopers, and more, in the Related Posts below this video