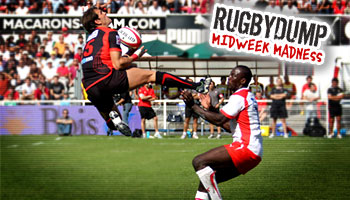 If you were one of the 700 million viewers who watched the football World Cup final on the weekend, you would have seen the Netherlands’ Nigel de Jong controversially kung fu kick Spain’s Xabi Alonso in the midriff. While that was appalling, weve gone one better and pulled out this shocker from last season.

The clip comes from September last year in the French Top 14 as Biarritz beat Toulon 23-9. The incident at hand features England international Ayoola Erinle who plays the part of Alonso, while Rory Lamont comes in as De Jong.

As youll see, Scotsman Lamont launched himself in the air to take the high ball and unfortunately stretched his leg out, catching Erinle in the face, studs and all.

Erinle was left on the floor, seemingly unconscious, with blood pouring from his cheek. Lamont wasnt punished for the flykick, as it was deemed to be unintentional. By all accounts it was accidental, and Erinle perhaps paid the price for being a little clumsy in the challenge, charging in without competing for the ball. Some will say it was Lamont who was clumsy though.

Whatever the case, as you can see in the last replay it was pretty spectacular looking and the impact was significant, although it was luckily somewhat of a glancing blow.

When getting up for that high ball , its probably a good idea to try keep control of your legs. The hurdling action isnt appreciated by kick chasers. Just ask Ayoola.