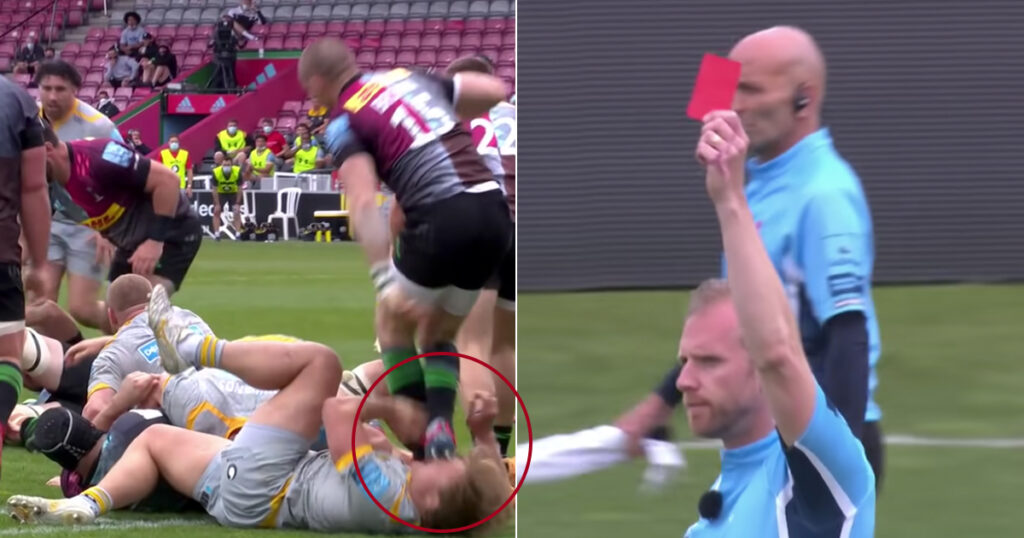 Mike Brown’s Harlequins career is over after he was given a six-week ban for stamping on the head of Tommy Taylor.

Brown was sent off for the incident that took place four minutes into the second-half of Saturday’s dramatic 48-46 Gallagher Premiership victory over Wasps at Twickenham Stoop.

A disciplinary hearing decided that the accidental stamp warranted a high end sanction of 12 weeks which was reduced to six because of his unblemished disciplinary record and admission of guilt.

Even if Harlequins reach the Gallagher Premiership play-offs Brown will not be involved with only four rounds of the regular season left to play.

England’s most capped full-back joins Newcastle during the summer following a contract dispute, meaning his 16-year career at Quins has come to an end.

If fourth place Quins fail to reach the play-offs, or are knocked out at the semi-final stage, then Brown’s Falcons debut next season will be delayed. He has the right to appeal.

“The panel reviewed extensive video footage which included numerous angles and speeds and heard direct evidence from the player as to his actions and intentions,” a Rugby Football Union statement read.

“Having considered the totality of the evidence the panel was satisfied that whilst this was a stamp to the head, it was not deliberate.

“Given the location of the contact and the nature of the actions the Panel considered that this was a top end entry point but that there was no reason to go above the starting point of 12 weeks.

“The player has an unblemished disciplinary record over a long and illustrious career, he accepted the charge at the earliest opportunity and impressed the panel with his honesty and obvious contrition throughout the hearing. The panel had no hesitation in allowing the maximum mitigation of 50 per cent.

“The panel would encourage supporters of the game to avoid viewing this as nothing more than a brief video on social media which does not capture the full nature of the incident.”

Brown won the last of his 72 England caps in 2018, although he was involved in the build up to the 2019 World Cup as a member of an extended training squad.

The 35-year-old has made 242 appearances for Quins since 2006 and is departing Twickenham Stoop after failing to secure a new contract with the club.

Bath hooker Tom Dunn will also play no further part in this season after receiving a four-week suspension for a dangerous tackle against Bristol on Saturday.