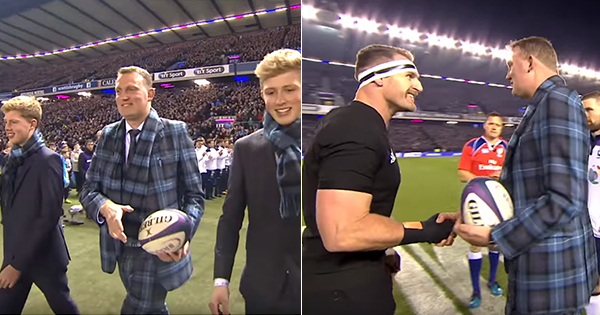 There wasn’t a dry eye at Murrayfield on Saturday as Scotland legend Doddie Weir took to the field with his sons to deliver the match ball ahead of kickoff against New Zealand. Weir has been suffering from Motor Neuron Disease since being diagnosed in December.

It was an emotional moment, as he was clearly touched by the rousing reception. As was Kieran Read, who revealed what he told him when they met.

“It’s hard to say too much. I just said ‘mate, you’re looking well’.

“He got out there pretty good. Our thoughts are with him, and I know the Scots are doing a great thing for him in this game in donating their jerseys.”

All of the Scotland jerseys had Doddie’s name and his cap number on them, and were presented to him after the match for him to auction off for his charity.

Scotland were clearly inspired as they put on one of their best ever performances against the All Blacks, narrowly going down 22-17 after a thrilling finish to the game.

Weir has set up a charitable foundation named My Names’5 Doddie Foundation to raise funds to investigate how to overcome and prevent MND as well as help out others who are suffering from the degenerative condition. Donations can be made to the foundation by texting MNDD05£1 to 70070 or visiting www.myname5doddie.co.uk

What a moment last night,

Not a dry eye in the house