Motu Matu'u massive hits and great sportsmanship against the Rebels 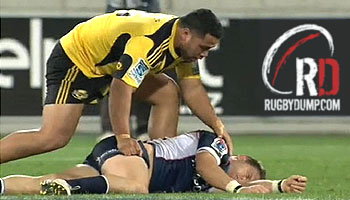 Hurricanes hooker Motu Matu’u was responsible for taking out two Rebels players within the space of a few minutes in Wellington on Saturday. He put both Mark Gerard and Lachlan Mitchell in hospital, but showed he’s a class act too.

About two months ago Matu’u caught everyone’s attention with an incredible hit on Matt Hodgson that knocked the Force number eight out cold. He did something similar during the Hurricanes’ 66-24 demolishing of the Rebels this weekend, twice.

The first of his huge hits, on Gerard – who made the mistake of trying to dummy and step the replacement hooker – resulted in a damaged sternum. Gerard soldiered on for the rest of the game, despite the quite obvious pain he was suffering from and the concerns for his health. At one stage the female medic was quite comically chasing him around the field to make sure he was okay.

Rebels captain Gareth Delve, who was disappointed in the heavy defeat after they’d won their last two games, said that despite the brutal nature of them, the hits were perfectly legal.

“I didn’t see any issue with the tackles,” he said. “The guy’s hit hard and Mark Gerrard showed great courage staying out there otherwise we would have been down to 13 men.”

Mitchell was smashed by Matu’u in another ferocious tackle only a minute or so after Gerard, knocking him out instantly, resulting in him being stretchered off the field.

“With Lachie, it’s a sad sight to see him go off like that,” Delve said of Mitchell, who having not missed a match in their 28 game history in Super Rugby, will now be relegated to the sidelines.

On a positive note, Matu’u showed a tremendous act of sportsmanship as he went over to check on Mitchell as soon as he could, and just like Tana Umaga did to Colin Charvis some time back, turned him over to prevent choking or serious problems.

He thanked everyone for the positive support the next day, and admitted via Twitter that his opposition weren’t the only ones hurting. “Body feels like it’s been hit by a car,” he said.

You can view other great acts of sportsmanship, and big hits, in the related posts below. We don’t have a full clip of the Jerry Collins/Colin Charvis/Tana Umaga moment, but there is a short clip in the Collins ‘Terminator’ feature, also listed below, so have a look at that to see it.