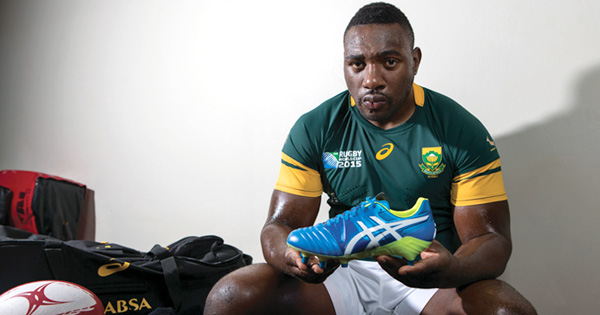 Ahead of Rugby World Cup 2015, Springboks rugby players visited the ASICS Institute of Sport Science, Kobe, Japan to provide direct insights into the development of apparel and footwear made by ASICS. The new jersey was launched in Cape Town last night.

Technical detail introduced to the jersey will enhance performance and give the Springboks the platform to dominate the World Cup.

Jean De Villiers, Springboks Captain, said “If we can bottle the atmosphere and enthusiasm from this launch, then we’ll start the rugby world cup on a very positive note. We’re amazed at the level of detail and research that ASICS has put into creating the kit, which reflects the detail we put into our own preparation.”

The official Rugby World Cup 2015 Springboks shirt will be the lightest jersey the team has ever worn. It is packed with technology focusing on different areas of the game. Grip on the ball is improved with special silicone pads on the ribcage and the jersey is designed with special fabrics to make the shirts harder to hold onto in the tackle.

The Springboks rugby jersey features three key areas of technical updates which bring a new level of detail to rugby jerseys. ASICS understands the needs of rugby players and has developed technologies aimed at improving performance.

Every aspect of the Springboks jersey has been designed with the aim of reducing weight without compromising on strength. The jersey made by ASICS will be the lightest jersey ever worn at a Rugby World Cup by the Springboks.

ASICS obsession with making the shirt lighter brought them to the decision to include 3D badging technology to make the logo the lightest it possibly can be. By replacing traditional stitching methods ASICS saved a significant amount of weight.

“This is the lightest jersey we’ve ever worn and it’s going to give us a great advantage”, said Tendai ‘Beast’ Mtawarira. “You might not feel the advantage of a lighter jersey instantly, but over the course of a game and tournament, with the rising intensity of international rugby, you will reap the benefits every time you pull it on. We train extremely hard and analyse every element in our preparation and ASICS has done the same, every detail counts”. 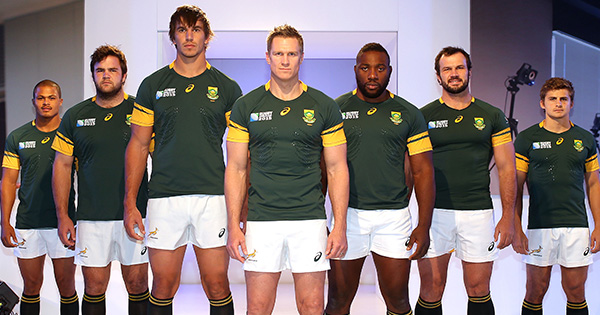 After working with players to gain their insight, the socks have been improved with a cotton footbed that improves the traction of the foot on the boot.

The socks work to improve blood flow, this alleviates fatigue, allowing players to play harder for longer as well as aiding recovery post-game.

ASICS believes in developing product that suits the needs of each athlete. Creating the GEL-LETHAL TIGHT FIVE and the GEL-LETHAL SPEED, ASICS has boots specifically for both forwards and backs.

Forwards in the modern game require a stable footing as they seek to counteract the forces applied in scrums, mauls and rucks. Featuring six front studs, the GEL-LETHAL TIGHT FIVE gives players the grip and footing they require when pushing to gain an advantage in contact situations.

The revolutionary ASICS HG10 is a key component in this boot. The 10mm heel raise, the difference in height between the heel and forefoot, offers the best biomechanical position for rugby players. HG10 protects and enhances forward motion, reduces load on the Achilles tendons, calf muscles and hamstrings.

A firm fitted heel cup means players feel confident that they can push with full force and the boot will remain gripped in place. A rear foot GEL is also included to reduce the influence of impact on players’ body. 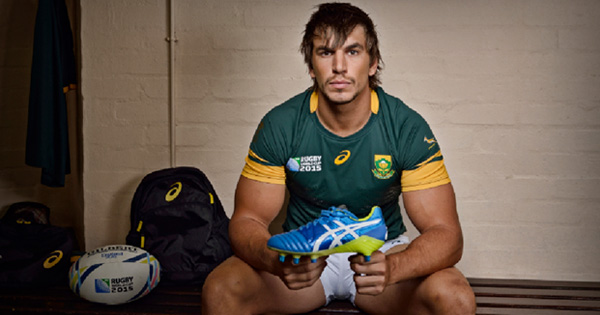 The GEL-LETHAL SPEED is aimed at backs who want to move quickly, yet still feel confident going into contact. It features only four front studs, allowing maximum velocity and reducing weight to give players the freedom to move across the grass.

A lightweight, seamless upper construction improves durability and performance, while added protection of the big toe allows players to know they are protected in contact situations.

The GEL-LETHAL SPEED also features HG10, as well as giving an easier transition from standing to forward momentum.

Below is the launch video, featuring ASICS developing the shirt, with direct insights from the Springboks, at the ASICS Institute of Sport Science (ISS) in Kobe, Japan.

In the build-up to the launch, ASICS and the Springboks released a series of teaser videos featuring the Springboks at the ASICS Institute of Sport Science, Kobe, Japan.