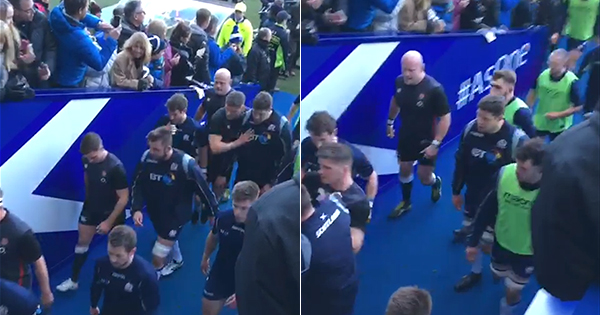 While losing to Scotland for the first time in ten years will weigh heavily over the England squad, they now have to wait and see if Owen Farrell will face punishment for the scuffle in the tunnel before kick-off. We’ve got new footage of the incident.

Six Nations Rugby will investigate what actually happened after BBC cameras picked up on the pre-match skirmish and it was then shown and discussed in studio at halftime.

“Six Nations Rugby will be writing to the unions to request clarification on what happened in the tunnel,” said a statement on Sunday. The explanations from the Rugby Fooball Union (RFU) and Scottish Rugby Union (SRU) will determine the next steps.

Farrell could be seen charging into the tunnel after both sets of players had completed their warm-up prior to the match, that Scotland won 25-13, kicking off.

In this new footage that we’ve kindly been sent, you can see how Farrell tried to weave through the Scotland players, but then appeared to push them aside with little respect.

Unfortunately that’s when the video ended, but it gives you an idea of how it looked from that angle, as Scotland’s Ryan Wilson in particular took exception to what went on.

England coach Eddie Jones commented after the match that he did not know about it, while Scotland skipper John Barclay played down the incident, saying that he had only heard about it.

“I heard about it but I am always the first off the pitch after the warm-up and I was in the toilets. It is one of those things that gets built up into something more than it was. It is a big game and a big rivalry. It was niggly and physical with a lot on the line.”