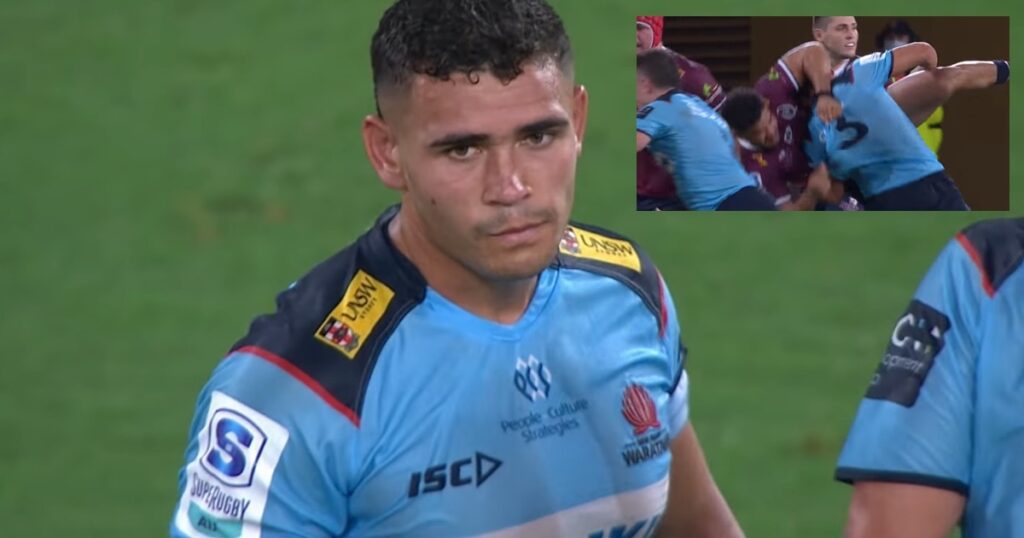 New South Wales Waratahs back-rower Izaia Perese became the first Super Rugby AU player to be red carded under the new law variations for the 2021 season when he saw his marching orders following a dangerous tackle.

Under the new law, a player who is red carded may be replaced after a 20-minute period, meaning that the Waratahs were back up to 15-men a quarter of an hour into the second half in their opening round defeat to the Reds.

Perese was sent off after a tip tackle on Hunter Paisami just before the end of the opening 40 minutes, a decision which could mean the end of the season for the flanker.

It was a clear-cut red card offence for Perese, who has previously played for Bayonne in the Top 14 after a short spell in Rugby League, but the greater interest was that of the new laws.

Not that it helped the Waratahs much of course, Rob Penney’s side went down 41-7 after a superb James O’Connor inspired performance from the home side.

With red cards the talk of recent weeks following two in the 6 Nations so far and a total of five over the course of the Gallagher Premiership last weekend, the idea of replacing sent off players after 20 minutes is a novel way of keeping matches competitive.

There are limitations to the laws, however. If a team has already used all its replacements, the sent off player cannot be replaced. In normal circumstances, the replacement would cover the exact position of the sent off player, but it is not hard to imagine a prop being brought on for a winger for example if all other replacements have been used.

Whether the northern hemisphere embraces similar law variations, which also include a shortened extra time element in the event of a drawn match, is unknown but it does make things slightly more interesting. This is called Super Time and the Golden Try – which is the first try in the extra time segment – wins the match.

Many of the same law variations apply in Super Rugby Aotearoa, which includes the goal-line drop-out and no marks permitted in the 22. These have been introduced to speed up the game and, although the laws have their benefits, the jury remains out on whether they are here to stay.

You can see the tackle at 2:40 into the highlights video below