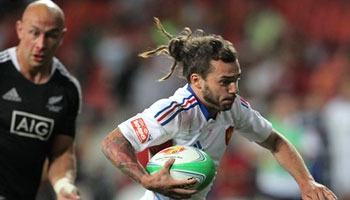 The New Zealand Sevens team won their four successive Cup title in South Africa at the Port Elizabeth leg of the HSBC Sevens World Series. They convincingly beat France 47-12 in the final, and you can view all the highlights from both day’s action below.

Coach Gordon Tietjens experienced success in South Africa once again, taking his ninth win in fourteen appearances, which coincided with his birthday. “It was an awesome birthday present. I have had a lot of luck with the team in the last four years to win on my birthday,” said Tietjens.

“It was important. We talked about it, we were beaten by a good Samoa last time, beaten by Fiji in Australia. We had to win this one. You never underestimate the French either, coming into a final they have as good a chance as any so to win it convincingly in the end was awesome.”

France coach Frederic Pomarel viewed things slightly differently. “It was a very strange tournament and my team is very strange,” he said.

“I think it was a very difficult pool for France, only one victory, but with many points against Australia it was enough. The second day is always another day. I think my player are not very in place with the ball, but without the ball they are big fighters.”

New Zealand are now at the top of the overall standings with 60 points, with France in second at 46, Fiji third on 44, South Africa 41, and Samoa on 39.

View highlights of days 1 and 2 in the playlist below. Hit next to skip to the final days play