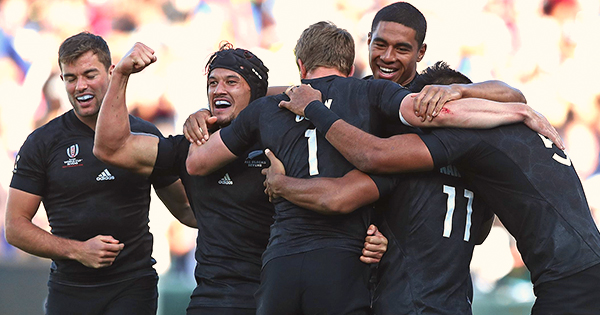 New Zealand’s Sevens team have become the first team to win the Rugby World Cup Sevens title for the third time after they beat England 33-12 in the final in San Francisco on Sunday. This adds to the success of the Women’s team, who were also victorious.

Tournament favourites South Africa and Fiji both exited at the semi final stage, knocked out by England and New Zealand respectively. They went on to play for third place, with the Blitzbokke taking that honour by beating Fiji 24-19.

New Zealand’s win sees the country picking up an unprecedented double-double, as both All Blacks Sevens and the Black Ferns won for the second RWC tournament in succession.

“The double is huge, both the men and women train in the same place and they put pressure on us by winning their final,” said Tim Mikkelson, co-captin.

“We knew coming in it was going to be tough. We nearly got knocked out by France but raised it against Fiji. Credit to the coaching staff, the coach brought the boys together. We didn’t get the results but we kept on working.”

Scott Curry, named AIG Player of the Final, was delighted with his team’s performance. “It’s amazing, very hard to put into words. I’m so proud of the boys’ efforts over the weekend – we had four really tough games. Credit to England, who played really well.”

“It’s obviously disappointing to have missed out on that top spot but we made a few too many errors and turned the ball over too many times against a very good New Zealand team.

“I’m delighted with the way that the guys performed right the way through the tournament – they came through some really close games and played some outstanding rugby.

“This marks the end of a very long year but I’m really pleased with the way that we’ve grown as a programme and how the players have grown as well.”

New Zealand were previously RWC Sevens champions in 2001 and 2013 while England were looking for their first title since winning the first edition of the competition at Murrayfield in 1993.

Catch up on the Quarter Finals from Day Two