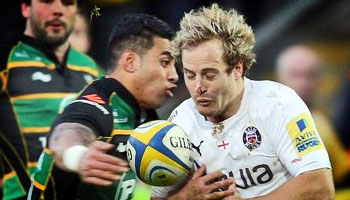 Another fantastic rugby year has come and passed as we now look forward to 2012, which has many big things in store for loyal Rugbydump followers. For now though let’s end 2011 with two big hits from a few days back in the Aviva Premiership.

Perhaps more than any of the five years we’ve been running, 2011 has seen great strides made in terms of getting the website in a position for genuine growth. With the platform and relationships in place, RD will continue to improve, grow, and diversify over the next year. Those of you who visit regularly will start seeing the changes take place and your online rugby experience will soon improve significantly.

As always, the site is driven by user interaction and feedback though, so keep in touch and make sure you share your thoughts and ideas with us via our rapidly growing social media channels on Twitter and Facebook. Site traffic has also reached record levels in recent months, so keep visiting and sharing the love, and we’ll keep improving. Win-win for everyone.

Back to this clip, and it features Bath’s Nick Abendanon smashing Lee Dickson as Saints attempted a move off the back of the scrum a few days back. The impact was massive and might have been called a shoulder by some cynics, despite it looking okay to the officials. Dickson unfortunately appeared to bite his tongue, which would not have been the most pleasant thing to experience while getting smashed to the floor.

George Pisi got a bit of revenge a few minutes later though, as he flew at Abendandon in another crunching hit. The Bath fullback has a bit of a history with Samoans actually, so make sure you check out the related posts below which include a few huge tackles on the poor guy.

We’d like to wish you a very Happy New Year. Stay safe and have a brilliant 2012!