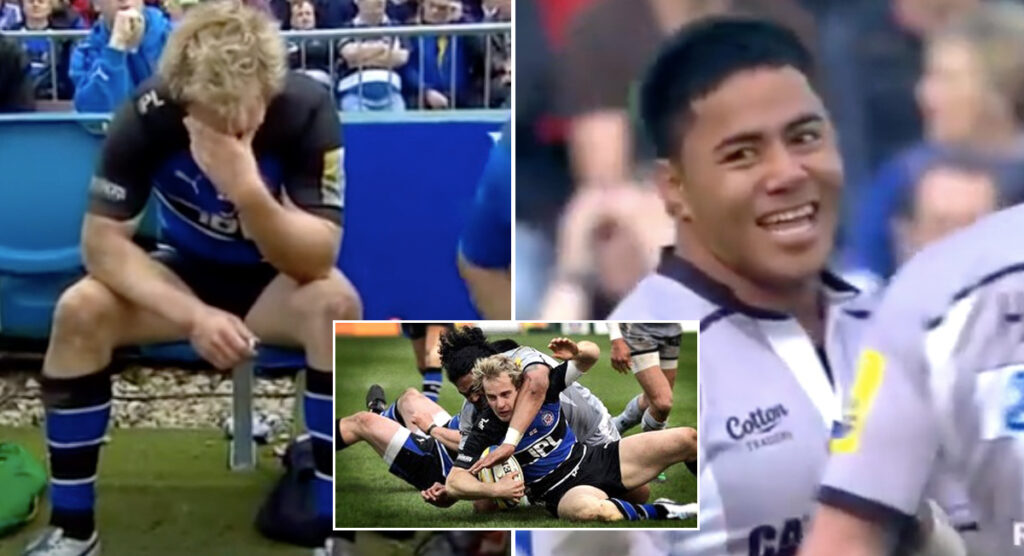 Leicester Tigers gave Bath an almighty hiding in their Aviva Premiership meeting at the Rec on Saturday, scoring five tries to nil to come away 37-6 victors. There was one guy however who took the hammering more literally than others.

Fullback Abendanon, who was courageous throughout, took some of the biggest and most frequent hits you’re likely to see this season. It actually became quite comical for the viewer, as whenever the fullback got the ball, there seemed to be a Pacific Islander sniffing him out.

First it was Manu Tuilagi who smashed him with one of the biggest, and possibly best, hits of the game. Not too much later older brother Alesana got in on the act, and from then on the England capped back was battered at regular intervals. As if dealing with the two Samoan brothers wasn’t bad enough, Tongan Steve Mafi also pounded him late in the game.

Abendanon did show tremendous courage though, as no matter how often they dished it out, he kept getting up for more and put in a few good runs and one fantastic try saving tackle in particular. He eventually hobbled off the field with just over ten minutes left but when a fight kicked off, he miraculously turned up again, in the thick of it.

“I saw someone take a cheap shot at one of my team-mates and I dived on to the pitch to try and separate a few bodies. It was not the right thing to do, but I had taken a couple of good knocks to the head and maybe wasnt sure of what I was doing,” he explained, and said he has since apologised to the officials for his out of character behaviour.

It was a physically devastating, yet brave afternoon of rugby for Abendanon. While he was able to walk off the pitch after the huge knocks, he was no doubt feeling worse for wear the next day.

“Wonder why we play this game when I wake up feeling like this!” he said on twitter.