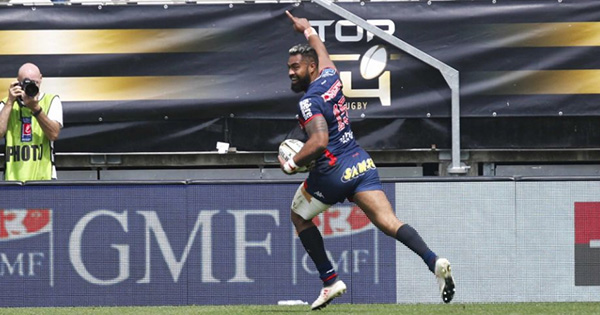 It was all smiles for Grenoble at the Stade des Alpes on Saturday evening. With their chance of promotion on the line, they smashed Oyonnax 47-22 to return to the Top 14. The playoff match was characterized by big shots from both sides, none more so than this one from former New Zealand Sevens player, Nigel Hunt.

Grenoble certainly appeared keen to send a message on their way to the top, dishing out several punishing hits and scoring seemingly at will.

The shot of the day undoubtedly belonged to Hunt, who perfectly timed his challenge after a poor hospital pass left Maxime Veau exposed, allowing Hunt to take him fully parallel in a brutal tackle.

To make matters worse for Oyonnax, Veau appeared to have heard footsteps prior to the hit and couldn’t secure the ball. The sloppy bit of play resulted in a try in the opposite direction, courtesy of Lolagi Visinia.

Even though this put the match well out of reach, Grenoble weren’t done and scored one last try to complete the rout, relegating Oyonnax to Pro D2 while securing their promotion to the Top 14.