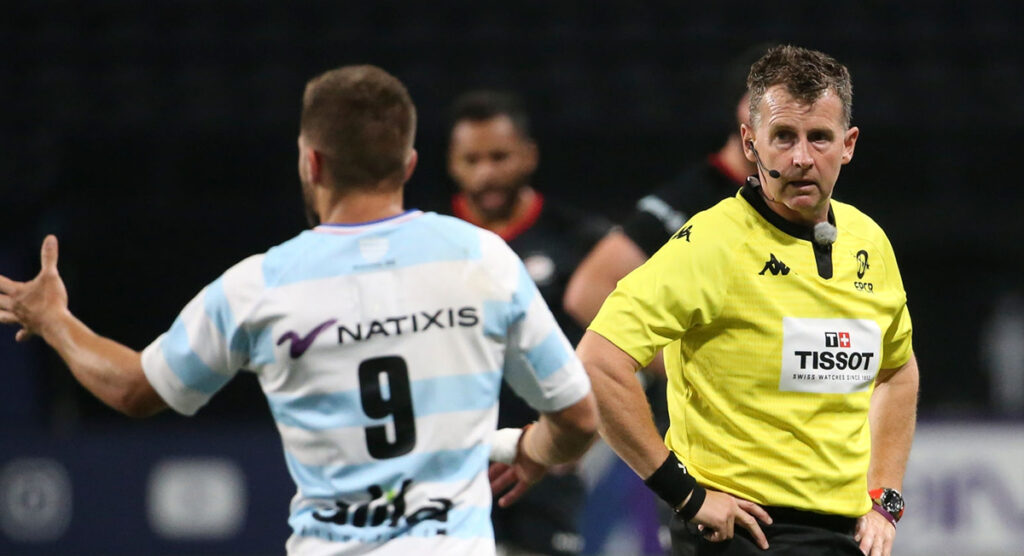 Referee Nigel Owens has received many plaudits after some of the decisions he made in Racing 92’s Heineken Champions Cup semi-final victory over Saracens on Saturday.

The Welshman noticeably penalised Racing 92 scrum-half Teddy Iribaren in the first half for failing to use the ball at the base of the ruck, despite his calls of “use it”. This is a law that is seldom enforced by referees, and Owens has consequently received a lot of praise online for his decision, as this is a longstanding bugbear of many fans.

The laws of rugby state: “When the ball has been clearly won by a team at the ruck, and is available to be played, the referee calls “use it”, after which the ball must be played away from the ruck within five seconds.”

The sanction for failing to do so is a scrum, and though it seems so simple in theory, it is less so in practice.

The match was hotly officiated at the breakdown, with zero tolerance for any players impeding the tempo of the game. Even when considering that, it is still surprising that a player was called up for failing to use the ball, despite that being the law.

Later on in the match, Owens again blew Saracens up for being in front of the kicker, another area the game that is rarely picked up by officials.

Owens did not let the magnitude nor the context of the game deter him from enforcing the law. Iribaren was penalised five metres from his own line, while Saracens were called up for being in front of the kicker at a kickoff in the dying moments of the match, as the London side were desperate to regain possession.

Owens has even offered a riposte on social media to those that have suggested the Frenchman Iribaren may not have understood the command “use it”.

He is unconvinced that players from France do not understand that command, whilst also saying that it is a tall order to expect referees to speak “Welsh, Italian, Fijian, South African, Spanish, Georgian, Russian, Irish Gaelic, Scottish Gaelic, Tongan, Samoan, Japanese.”

Seriously? You think any players don’t know what use it is ? I look forward to you asking all refs to learn welsh, Italian, Fijian, South African, Spanish , Georgian, Russian, Irish Gaelic , Scottish Gaelic Tongan, Samoan Japanese . Now jog on

Though it is promising that such overlooked infringements were noticed in this match, one swallow does not make a summer, and it is still unlikely that these will be frequently picked up. Moreover, there are still more laws, such as not feeding straight at scrums, that still irritate spectators. But this was a start.

Nigel Owens has gone up even higher in the estimates of rugby fans everywhere for being the first referee to penalise a team for being too slow at a breakdown!

It’s about time more refs don’t do this, so sick of the 5 second rule being abused, also think the clock should be stopped until the ball is out of the scrum

Well Done Nigel Owens. Ridiculous practice. Everyone should ref the 'Use it' law.

Catch up on the match highlights